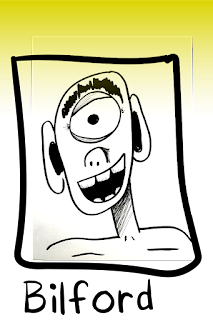 When Bilford passes by, he knows you're talking about him. He's usually fine with it because he makes more money than you, and he can use that money to get rid of you, but, really, you shouldn't talk about people in hushed whispers because it's just impolite.

Miss Manners would simply roll over in her grave.

It's not his fault he was born with just one. Single. Giant. Eye.

His genealogy stems from that of Greek Mythology. You probably didn't catch that episode of "Finding Your Roots" on PBS.

Throughout life, he's always been depth-of-field-challenged, and although it's all he's ever known, he can drive a Go Cart better than any Mario, Luigi or Toad.

So, hush. Plus, he's about to enter his ninth year as a NASCAR race car driver. He makes more money than you. You probably already work for him, and you have no eye-dea.

He'll look the other way at all your eye jokes, except for one: he will tell you that he has his eye on the Daytona 500.

You better laugh at that. If not, he'll throat punch you. He already won the Indianapolis Brickyard 400. Daytona is next, and so are you.

So, anyway, the holidays have just ended, and people have been flooding to the movies, haven't they? Just...please don't bring up any 3D movies with Bilford. He so desperately wishes he could see 3D movies.

They're still making them, aren't they? Was "Avatar 2: Bring On the Water Peoples" available in 3D?

It was. I Google-searched-it-up. That James Cameron...

Bilford, however, has written quite a few letters to them movie executives in charge of 3D distribution, but it turns out that the people that make 3D movies won't cater to cyclopses (cyclops?).

I mean...the Dual-Eyed-Impaired. That's what cyclops (cyclposes?) go by these days. They stopped using the term cyclops, like, forever ago. It's just so mythology. I mean, the last person to describe one of Bilford's ancestors was Odysseus.

And what is he up to these days? Lately, he's been telling his wife, Penelope, that he's on his way home, but apparently he's caught up in a bunch of side quests.

It's probably just him sitting in a recliner playing D&D VR.

Let's see if Penelope and Bilford match on eHarmony, and if they do, eye will definitely be at their wedding.