Of Monsters and Produce 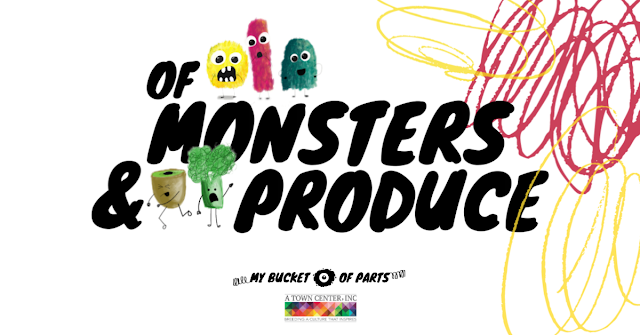 A year ago, I spent the summer consumed with anxiety due to events out of my control. It took all my strength to cope. When I should've lost myself in writing, I ran from it. Writing became another anxiety trigger, but I longed to create. Instead, I just stood still and vibrated at high speeds in one place -- if I did create, it was through design, and not writing. I felt like I was cheating. I should've been writing, right?

It was miserable -- the type of miserable that takes small bites out of your soul. When the school year began, I was happy to distract myself with work.

We fast forward a year later to find myself in a very different place. The aforementioned anxiety has been kept at bay, but something new is on the horizon: I'm about to have my first art show/exhibit.

It's a very different reason to stay awake at night.

While I am not necessarily whiling away the remaining days of my summer, I have thrown myself in preparation for this so-called show that will happen at the beginning of August. It's not something I ever saw coming, planned to do, even expected, but at the same time, I've been surfing these waves all summer and for the first time in a long time, as a person who longs to create, it feels right.

Before, I ran screaming from working on my novels-in-progress. It was highly creative work, but it was daunting, lonely, and at the same time, fairly unfun. And while drawing and illustrating parallels writing in that I do it alone, some of the pieces seem daunting, and I've failed more times than I've succeeded, I'm not running from it.

I keep running back to it.

I spend hours working on multiple pieces at once, learning how to use acrylic and watercolor paint, figuring out my style with colored pencils and markers, and creating bright new characters of monsters and produce, which which I have based my show.

My goal this summer was to create art. I feel fulfilled because I have done exactly that. I have more than twenty pieces that will be displayed at my show.

I have received compliments from what's been seen thus far, and while it's very uplifting, I'm also afraid to showcase some of the pieces I've been working on.

Because I feel like after the show is done, I have to go back to being where I was before, and while I know that is far from true, I also feel like I'm a fake.

That I don't deserve the artist label.

That I'm just some amateur hack.

And while part of that is true -- within the last six months, you should see my notebook and how far I've come. It's pretty noticeable. I may feel like a fake at times, but I'm not going to let it stop me.

So, join me at my show: I'll have stickers, smaller printers, larger prints, and just examples of my monsters and produce that I've been obsessing over. It's from 5 to 8 p.m at A Town Center on Friday, August 2nd.

I'll be the one wearing a hat and holding a ceramic cup.
Labels: a town center artist MBoP designs of monsters and produce