Let's review a few books at once, shall we 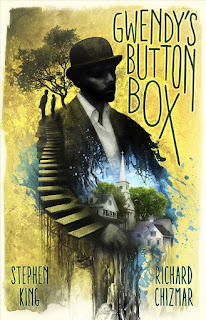 They're the length of a children's book, with the content of adult life. You don't have time to swan dive into Gone With the Wind, but you still want to settle into a book? Pick up a novella.

As a constant visitor to Stephen King's website, I'm always curious with what he has waiting in the in the wings. He often publishes with independent publisher Cemetery Dance -- and usually they're special editions of his already-published books, so I don't pay much mind.

"Gwendy's Button Box" was featured, co-written with Richard Chizmar of Cemetery Dance, and packing in 175 pages, a copy was instantly available at the library, so I picked it up and read it in one sitting.

It's the blissful coming of age tale of Gwendy, a once slightly chubby girl, trying to lose a little wait. She meets a man at the top of the stairs of the park she's been working out at, and he gives her a button box. Push this button and you can do this. Pull this level and it will do that. Here's a piece of candy that you can have once a day, and you'll realize some changes.

And changes she notices. She starts to get more popular at school. She becomes super athletic. She sheds the rest of her baby fat, and as she continues to grow, she begins to learn, sort of, the powers of this mysterious button box. She pushes one button, and there's an explosion on another continent. Did she cause that? She's not entirely sure. She's sick to her stomach. She doesn't want the candies anymore, but she's in charge of the button box -- and she doesn't know when the stranger will come back to claim it.

This shortened tale from King and Chizmar tiptoes around the fantastic and asks the question: Can you be responsible with absolute power? 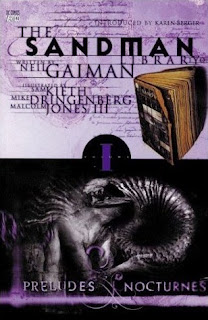 Years ago I became a sucker for graphic novels because I learned that it's a television series in book form. There are drawings? I love drawings. It's mostly dialogue? That's my favorite part of any book. There's limited exposition? Sign me up.

I also enjoy a good graphic novel because it takes me an hour to read it. I follow a few people on social media that breeze through books. They are constantly posting what they've read, and, I swear, with their reading powers combined, it's like 50 books a week -- total.

I am not over-exaggerating.

This is why social media sucks -- I feel completely inadequate because I'm not blasting through book after book after book. I mean, if I really considered myself a writer, well, I should be reading like it was my job.

So, as I felt inadequate, I picked up a ton of graphic novels this summer.

And, yes, it is a competition.

Neil Gaiman isn't losing. His 90's phantasmagorical escapes into graphic novel-dom is still considered one of the best.

Here we've got the god of sleep, but the poor guy was captured by a small cult hell-bent on using magic for their own evil.  They were actually trying to kidnap Death, Dream's sister, but whoops. That didn't happen. So Dream, or Morpheus, bides his time before he escapes. It takes him 70-plus years, but when he does, all of his magical tools have been scattered to the wind. The rest of the first volume is mostly about his solitary journey in gaining those tools back.

This is the first graphic novel Gaiman ever worked on. He claims it was awkward, but the story doesn't feel awkward.

Instead, it feels timeless.

This is the second time I've read the book, but a review never came about the first time.

The first story arc is spooky, gory, funny, speculative, sad, melancholy, and insightful. I'm not surprised all of that can be stuffed into a story about the god of sleep, I mean, it is Gaiman we're talking about. His ability to weave a story is under-rated.

He doesn't get the pomp and circumstance that he deserves.

"Everafter: From the pages of Fables" 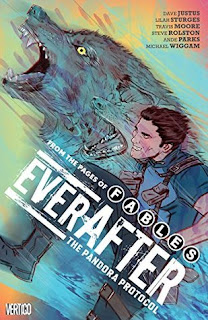 The "Fables" series from Vertigo comics is the reason I became a fan of graphic novels. I read them for summers -- and luckily, my library had all the copies.

If you're not familiar with the basic concept of the graphic novel, some are stand alone books that a writer/artist will put together to tell one story. Others are actually comic books. The comic books come once a month, but once a story arc is told, all of those issues are published in one volume.

I waited until all the comics were published in one longer volume.

It's like waiting for an entire season of my favorite TV series to be put on Netflix. While waiting for another "season" to come out in print, I go after other graphic novel series to pass the time.

The "Fables" series met its end last summer -- and it was time for it to go. It had lost steam, but there was still a hole in my heart. The idea behind the "Fables" story line was how the fairy tale characters we know and love are real. They had to escape their home land because of a terrible evil. They escaped to our world.

After various story lines, the series ended with magic making its way into our mundane world.

"Everafter" picks up where "Fables" left off. Some of the fairy tale characters decided to stay behind to help people in the mundane world figure out what all this magic stuff is, and these regular people are going to find themselves in so much trouble.

I'll be sticking around for more of this storytelling.