"The Circle" by Dave Eggers

I got to see Dave Eggers speak about 13 years ago at Butler University. He was riding the tidal wave of success with the Pulitzer-prize nominated "A Heart-breaking Work of Staggering Genius," and as a young writer, I expected to see a pompous ass that I was going to hate.

It was utterly the opposite.

Instead, he was pleasant and humbled. He spoke about writing, but more so, he introduced me to a nonprofit organization he had started: a place in San Francisco called 826 Valencia -- a place that helped kids in the community with tutoring, writing and publishing.

Each of the seven 826's have a store front that sells quirky knick-knacks. The one in San Fran has the front of a pirate store. There's a Time Travel Mart, a Superhero Store, a Secret Agent Supply Co. and more.

Then, behind a curtain or bookcase is the actual workshop where tables, books, computers, etc. are set up to aid in creation.

It's pure magic. If one were local, it is where I would be spending my time -- I would love to volunteer in a place such as this. 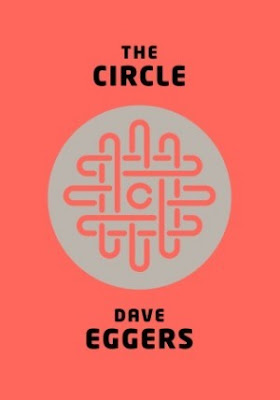 What does this have to do with "The Circle"?

This novel is the type of science fiction a science fiction hater could read. Along the river of literary genres, this book merely sticks its fingertips into the sci-fi genre.

And it may be one of the more important books of our time.

It's all kinds of caveat.

And Eggers isn't tiptoeing around the topic either. The reader is smacked in the face with all the what-ifs and could-bes, while treading water in different scenarios that deal with technological morality.

For a book that's 500 pages long, it's detailed and compulsively readable.

The Circle is a company that is Google-esque. It's a monster tech company that has merged all the different online tech and social media into one: Yelp, Facebook, Google, Amazon.

And Mae Holland just acquired a job there because she knows Annie -- a friend from college that works at The Circle.

Mae left a crap job at home, moved to San Francisco and starts work in Customer Experience, where she and her other CE workers must keep a median of 98 to 100 for customer feedback for the products provided by The Cirlce. Annie is a fast-talking hot-shot of the company that everyone likes. Her dialogue is quick-witted, filled with snark, and very jarring. She's there for Mae to get used to the job in fits and starts, but is often out of Mae's reach because she's somewhat of a honcho.

Mae is inundated with screens at her workspace. She stumbles through the mindframe that is the Circle worker, offending many in her early days at the company. She finds out that The Circle's campus houses many different buildings, cafeterias, concerts, speakers, parties, games, and dorms. A person who works at The Circle has access to the world without ever leaving the campus.

It's a beautiful juxtaposition.

Eggers also inundates the reader with detailed description of all the cutting-edge technologies that Mae is introduced to, and instead of losing the reader with the boring ins and outs, Eggers' imagery is so detailed, it's magnetic.

Does all this technology actually exist?

If it doesn't yet, it could. This is where good science fiction gets scary.

The writer's imagination becomes reality later down the road, for better or for worse.

Let's hope some of Eggers' visions are for the better.

Mae has amazing health coverage, and so she wears a band that navigates all her health data. It's a metal band, a Fitbit on steroids. It would take the Apple Watch down in the WWE arena.

One of her co-workers creates a special chip for children, and once embedded in their skin, the kids become traceable. Kidnappings become a thing of the past.

Crime will go down because who would want to commit an act that's supposed to be a secret?

Secrets are knowledge not being shared.

Eventually, these SeeChange cameras are used to make politicians "go transparent" by wearing them during work. By the end of the novel, more than 90% of politicians have "gone transparent" to showcase that there are no secrets in the work they are doing for the people.

Then, one night after an emotional evening with her family and a past boyfriend, she visits the kayaking place she goes to. It's closed, but a kayak is outside the fence. So she takes it for a spin.

And her small crime is caught by a SeeChange camera.

She wrestles with her action by talking to one of the Three Wise Men, and with his help, she realizes that secrets are lies, that privacy is theft. That sharing is caring.

And instead of losing her job, she volunteers to "go transparent" herself.

Mae starts out as a likable character, but the deeper she gets into The Circle, the more I wanted to shake her and tell her to snap out of it, to slap her because of her behavior. But before I could hate her any more, I realized she was just being used as a cautionary tale.

I stopped disliking her and started to feel sorry for her.

While Mae couldn't escape from what could come of nasty tech empires, of privacy becoming public knowledge, we can learn from her mistakes.

And also hope that a huge tech company, just like SkyNet, doesn't take over the world.