"Dorothy and the Wizard of Oz" by L. Frank Baum

You lied to me.

It's been brought to my attention, having read the first four books of the Oz series by L. Frank Baum, that there is an inconsistency about the Wizard. I don't know if he's a slightly wicked man or a derpy, good guy.

In "The Marvelous Land of Oz" (Book 2 of the series), the Wizard conquered Oz by overthrowing King Pastoria (Ozma's dad), snatching up Baby Ozma and handing her over to the evil witch Mombi.

Like, why you gotta go taking babies out of cribs and handing them over to witches? 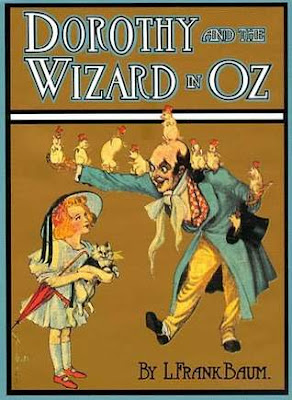 So, what is it Ozma and Wizard? Are you friends or are you enemies?

What Real Housewives sorcery is this?

Is Dorothy going to have to choose sides? Like, who is she going to go shopping with at the new Emerald City Downtown Mall?

You know I'm going to keep reading them. Just when I thought Baum stepped out of hot-mess territory, I step right in a new pile of steaming crazy.

In the fourth rendezvous in Oz, we find Dorothy and some kid Zeb on their way to a farm. Zeb's just there to pick Dorothy up from the train station. Dorothy's on her way to Uncle Henry, except there's an earthquake and Zeb, Dorothy, along with Jim the horse, Eureka the cat, and their carriage, fall down a fissure in the earth.

And keep falling. It's a pleasant fall, actually. Dorothy and Zeb make comments about how slow they seem to be going down.

It's all very "Alice Adventures in Wonderland."

Or should we call it peer pressure?

Once they hit land, Jim, the horse, can talk, as can the small kitten, Eureka.

This shocks Zeb, but Dorothy finds talking animals so pedestrian.

What they don't find pedestrian is the land they have, well, landed in. It's full of vegetable people. They are handed over to the vegetable king by a bunch of potatoes, essentially, and a vegetable sorcerer threatens Dorothy and her latest Squad. The Wizard has since joined them. As usual, he's traveling by balloon, but instead of landing on earth, he got sucked down the fissure created by the earthquake.

The vegetable king sentences them to death because apparently it's their fault the earthquakes happened.

The Wizard doesn't like this, so using his "humbug" magic (tricks), he assembles a sword out of pieces he's hiding, and cuts the vegetable sorcerer in half, killing him.

This is when we find that the insides of the people are mere potato.

These people are evil because they're a bunch of carbs.

And so begins the journey of Dorothy and her Squad as they go through a few lands in order to get back home. This isn't Kansas, or Oz, or anywhere we've ever been, Toto -- I mean, Eureka.

That's my next big question. What ever happened to Toto? He hasn't made an appearance since the first book.

He must've asked for a raise.

To keep costs down, Dorothy keeps bringing new animals with her to Oz.

I'd rather have Toto. This cat, this Eureka, is a bit of a diva. She constantly complains about how hungry she is and how she's going to eat the tiny piglets the Wizard keeps in his pocket. She has nothing nice to say. She's a total mean girl.

And Dorothy keeps threatening the cat. "We'll leave you here if you can't behave."

The cat knows Dorothy is fibbing, but she still plays along.

"Meow, fine. Meow," Eureka says, rolling her blue kitten eyes. "You're being such a meowtch, Dorothy."

In this book, we visit the Land of Voe, a lovely, green, hilly kingdom. It's filled with invisible people. Invisible because they eat magic fruit. They do this to hide from the bears.

The bears are also invisible.

But, the invisible people are very nice and give Dorothy and her Squad some nummy goodness for their tum tums. Then, they go off again on their journey.

Next they climb Pyramid Mountain. Here we meet a crazy old man covered in braids. Then, they seek refuge from the land of wooden gargoyles.

The scenes of escape from the gargoyles is actually pretty action-packed. It definitely would've made ladies pee their pinafores in 1908.

After climbing through a tunnel filled with dragons (whose tails are tied up because the momma dragon doesn't trust her baby dragons), Dorothy realizes that Ozma checks in on her with a magical mirror at 4 p.m. every day. By making some obscene hand gesture, Ozma knows to whisk Dorothy away.

And then, after sticking her middle finger up in the air, Dorothy disappears.

Then, Dorothy comes back with a magical belt and takes her Squad back with her to Ozma's palace.

This is when Baum lays out his inconsistencies about the Wizard and Ozma. Apparently, in this book, Ozma and the Wizard are cronies.

Until I read later books, we'll just have to assume Ozma and the Wizard are frenimies.

What "Dorothy and the Wizard of Oz" did, though, was provide some history about the land. It spoke of the four different countries of Oz: Gillikan, Quadling, Winkie, and Munchkin. It spoke how witches took over Oz, but the Wizard kicked them out unifying the entire land of Oz. The Wizard was responsible for building the Emerald City. Then, all the characters from past books -- the ones that matter, anyway -- came to visit.

The book felt like it was supposed to be the last Oz book. It re-introduced all the characters. The Wizard and Ozma are friends. It gave us a short history of Oz. Baum pretty much gave everyone a happy ending, wrapped up any loose ends, patted our bottoms and told us to be on our way.

Eleven more Oz books spilled out of Baum, however, so either he wasn't finished yet, or his publisher told him that he better add more to "The Real Housewives of Oz" or else.

Probably over dinner, where the publisher tried to flip the table on Baum, spilling wine instead, and then stormed out.

Then Baum probably called out after him, "Stop being such a meowtch!"