The Maeve everyone sees on Facebook, Instagram, and in person is this small, demure, beautiful puppy that remains an absolute mystery. Her mystery is why people must be drawn to her. The minute someone walks into our house, she hops onto the sectional (her safe zone) and runs away whenever anyone reaches for her.

They cannot have her, so therefore, they want her.

And believe me, they reach.

Because they all. Must. Pet. Her.

And she has blue eyes. Dogs with blue eyes, we all know, are uncommon, and therefore, exotic. The final piece to the trifecta is her coloring. She's a mix of tan, white, and shades of gray. Her gray fur blends with the tan, giving off hues of blue and purple.

It's no wonder Shelties like Maeve are called Blue Merle.

People react so fervently to Maeve, and we've learned it's all part of her scheme. She wants you to want her. It's how she manipulates everyone. 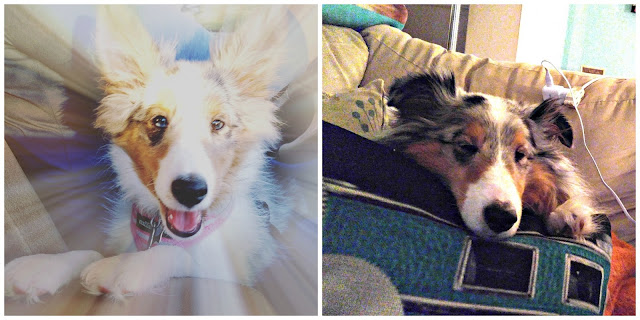 What people don't see, what they choose not to see is what we live with: the villain.

We saw her true self one night while she lay on the couch. She yawned, her little mouth stretched wide open, and her ears were not floppy yet, so so they tilted back, pointing back like horns.

The familiar horns of a certain Disney villain.

It was one of the first times we were introduced to Maevelificent.

We should've known. When we brought home the meek and shy Maeve as a weeks-old puppy and put her down on the floor, her true form showed itself. She trotted to Nigra's big brown pillow, sat down with a little harrumph, and instantly thought she owned the place.

As her size and fluff grew, the more villainous she became.

For those who believe she's the funnest most greatest thing merely because she's adorable, let's shine a light on some of her darkness.

For one, we are not her parents or her mommy and daddy. No. We are simply her Humans. There is Girl Human and there is Boy Human, and her constant victim is Girl Human.

Maevelificent isn't not usually allowed to go outside without being on a leash. One of her earliest forms of villainy happened one morning while Boy Human was getting ready for work. He took Maevelificent outside, without a leash, and waited for her to potty. Usually, Boy Human was able to pick up the little dog quickly, after she went, but not this time. Instead, Maevelificent shot off and started running around the yard, barking.

Boy Human chased her, running circles around one tree. Maevelificent thought it was the best game.

All the barking caused Girl Human to come outside. It took the two of them to get the little dog back inside.

And because of instances like that, the little turd needed to go to puppy school.

If it's not her behavior, then she uses her evil powers when it comes to the phone.

She doesn't care about other ringtones.

Once we answer the phone, the barking doesn't stop. If one of us is home, answering the phone goes something like this:

Boy or Girl Human does not say hello. Instead, Maevelificent's shrill barks are heard. Then, "Get away!" or "Maeve!" or "Stop it! Just. Stop it!"

That's how we say hello to each other when one of us is home.

And don't even bother trying to say goodbye. She may bark at only our ringtones, but she'll bark at everyone and anyone who tries to say goodbye to us on the phone. She has researched speech patterns and can recognize the end of a conversation. She knows when we're about to say goodbye, and because she hates goodbyes, starts to bark as the conversation winds down.

Yes, Maevelificent is shy in saying hello, but she is not shy when it comes to goodbyes. Regardless of how she felt about you earlier in the day, the minute you put on your jacket and get ready to leave, Maevelificent won't let you say goodbye. If you lean in to hug her, she will stiff-arm you. As you walk out the door to go to leave, she chases, barks and jumps at the assailant.

As the horrendous Maevelificent, Maeve has fine-tuned her ability to pest. One of the other infamous ways she pests Girl Human, and not Boy Human, is when she perches on the corner edge of the sectional, waiting for Girl Human to walk by. When Girl Human does, Maevelificent bites at Girl Human's behind. She chomps at it and makes an "I'm pretending to eat you" noise.

And don't even think about getting up from the couch. When we come back to our seat, little Maevelificent has already claimed it.

She stole it and uses it as her throne.

Ruling over her kingdom, planning more ways to wreak havoc.