The guy with a pirate shirt and lace-up boots

Author's Note: Typically my Interesting Characters are a chance for me to write about a random fictional personality, an exercise to stretch my writing muscles. Today, I'm going to introduce you to a character that was a real person. I don't remember his name, but his was one of the hottest messes.

One of my best friends in high school worked at the Wendy's on 96th street. While she worked there, she met a few work friends.

Some of those work friends were brought into our small group sometimes. The instances those random people showed up was like forcing a piece of the puzzle in the wrong place. It looks like it belongs, but it obviously doesn't.

And because this person doesn't really fit, now rest of us are all uncomfortable.

I believe this was a trend with some of my friends from high school. They were particularly fond of people that made you feel uncomfortable, like ill-fitting underwear. I should've had the wherewithal to walk away when said new person was introduced.

But, no. I usually lived through the evening, hating every moment of it.

I do believe a conversation or two happened when one friend said, "I don't like it when you bring in new people to the group."

And the other friend said something along the lines of: "Well, maybe our small group is getting boring."

Feelings were hurt, just like any scene from a dramatic high school confrontation.

Looking back, if these were the confrontations that were happening with friends...then maybe they weren't really the best choice of friends.

That or hormones. I mean, we were just teenagers. 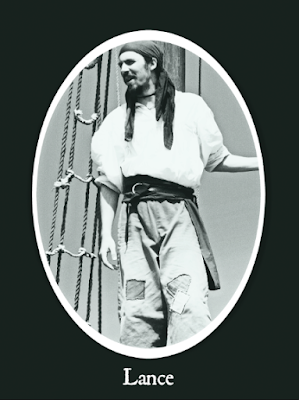 I preface the story with all this because there was one distinct time a friend from Wendy's came our way, infiltrating our small group of friends for a brief moment.

Of course I don't remember his name so we will call him Lancelot. Lance for short. Apparently my friend Jessie and her boyfriend had hung out with Lance, and he was so cool. You see, we were 16 or 17, but Lance...he was in his twenties.

Jessie, my best friend at the time, Derek, her boyfriend, and Lance had hung out one night, and it was insane, because according to Jessie, he gave them these wine cooler things that tasted just like Cherry Coke.

Jessie was all, "You couldn't even taste the alcohol."

I feigned interest because, well, what had happened was obviously illegal.

And then I met Lance, and realized not only was the whole scene illegal, but it was also creepy. Like, smarmy-creepy. The word residue comes to mind.

Lance had a personality that left a residue. Being near him made my soul soil itself. His existence reminded me of the slimy film similar to what a slug excretes when moving.

But since Lance was so amazing, according to Jessie, it was decided that we would all hang out one night.

My friend Beth and I decided that we would drive together, arriving separately from the others, to give us an easy out if need be. We pulled up into the Wendy's parking lot, where we were meeting, and standing out in the parking lot was Lance.

He had the long hair of dude from a 90's romance book cover. It drifted down over his shoulders in brown waves. Atop his thin frame was the frilliest shirt of ruffly cream, untied at the top, revealing chest hair. He wore skin-tight pants, and finishing his pirate role-playing-game ensemble was his calf-high, suede, lace-up boots.

"Everyone, this is Lance."

Jessie showed off her friend, this character from "The Princess Bride," with pride. It was like she had won some kind of contest.

It was decided that we would go to Lance's house and hang out.

Lance lived with his dad, who was a hairdresser. As we toured the ranch-style house, we saw that Lance's dad had a salon in the garage.

I saw it briefly in the dim spasms of cold blue fluorescent lights. The small salon reminded me of some off-kilter version of "Steel Magnolias" where sordid southern drag queens hung out, figuring out life, while getting their wigs pruned with glam.

It was all very John Waters.

Lance continued to give us the tour. He showed us his room, which was covered in slug slime. I mean posters. I think the bed had an animal print bed spread rustled and bunched up on top of it, and underneath that comforter were dark, silk sheets.

Even at that age, I knew you could never trust a person who slept in silk sheets.

Then, we made our way to the living room where Lance offered us all libations. Jessie told us to try the Cherry Coke ones because they were so good. To their dismay, Beth and I declined. We had spoken telepathically already, planning our escape.

Once Jessie had her adult Cherry Coke, she kicked her legs over the arm chair she sat in, like she was obviously so comfortable there, and in the most nonchalant voice asked Lance a question:

"So, have you decided how you're going to kill yourself yet?"

I heard the screech of a record off in the corner somewhere.

Beth and I obviously had no clue what Jessie was talking about, so she filled us in.

"Lance is going to kill himself before he turns 30."

Lance, then, disclosed that life wasn't worth living after 30.

You're a man in his twenties contributing to the delinquency of minors all while wearing lace-up boots and a billowy pirate shirt.

There's no where to go but down from there.

I looked for the end credits of this B-movie, but it wasn't over.

We were going to have to walk out on this one.

And we did, never stepping foot in the vicinity of Lance again.