The bell that hung over the door jangled as the woman walked into the store.


"Welcome to the Apothecary's Dilemma," the man behind the counter said. His head was shaved bald and shone with the light that cascaded through the windows of the two-story entrance. He wore a monocle in his left eye as he poured through an enormous tome of old writing. His frenzied right hand scribbled on a yellow legal pad.


The woman had blonde hair, the curls draping over the shoulders of her burgundy leather jacket. She pushed her black Ray Bans up, creating a headband. "Where might I find some of your rare books?" she asked.


He pulled the monocle from his eye and pointed to his right. 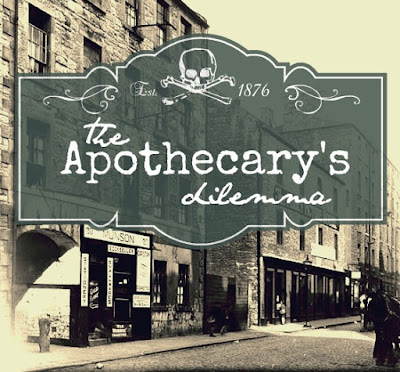 Behind her, a wall of windows allowed streams of midday light to gather across the almost black wooded store. The second story was visible from the first floor with only a waist-high railing acting as a wall. She could see through the stairs leading up to the second floor. The bookshelves on the top floor were perfectly inline with the bookshelves on the first floor. Particles of dust danced in the light as she walked past the stairs toward the stacks.


Her fingers graced the leather-bound spines of earthly colors. She skimmed the titles that pointed up and down. The book she sought wasn't quite as old as these. She pulled one of the books out, it looked like the title was in German, and pushed it back. She pulled another out, it wasn't the book she was looking for at all, but she opened the tanned and yellowed pages, listening to the glue in the spine crackle. She held the book up to her nose and inhaled. The biblichor was intoxicating -- vanilla cake and almond icing wrapped in the bark of an ancient tree.


A man she loved long ago introduced her to the aroma of books. Now the smell just brought back the saddest of romances entwined with the best of memories, a bittersweet that consumed her like the first sip of a strong red wine.


She put the book down. This wouldn't do. She would not find the book lined up with these antiquities. This, she already knew. The row of books, here, was the setting of their first kiss. It would be sacrilegious to visit this store and not spend a moment where it all began. 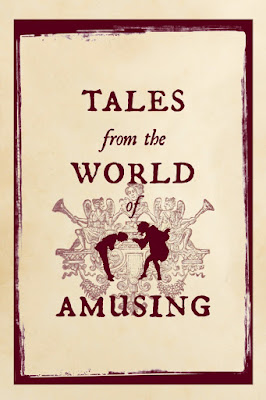 They may not have still been together, but she saw him everyday.


Their son had his eyes.


She approached the monocled man.


"You look good Stewart," she said.


He pulled the lens away from his eye, stuffing it in his front vest pocket, and looked up, then smiled. His lips revealed a line of crooked teeth.


"I didn't realize that it was you," he said, his voice a grumbled coo.


"What do I owe the pleasure?" Stewart asked.


He frowned at her. His unpleasant teeth disappeared, leading to an even more unpleasant snarl. "I haven't sold that book for a very long time," he said, looking down at his notes. "You know what happens to muses who are seen with that cancerous tome."


"Where's the renegade I once knew?"


"I have moved my interests far away from the dark side of amusing," he said, pointing down at the monolith of a book before them. As he tried to force the giant book shut, she forced her right hand in between the pages, blocking him.


"Stewart, you are one of the filthiest dirty muses I have ever met," she said. She opened the book back up and turned the book toward her so she could read what he was researching.


"I knew their ideas had come from somewhere," he said. "There are ancient writings that will help prove that the Triple A is truth. Maybe not the complete truth, but there's so much we muses don't know."

She knew he hadn't changed.


"That book was Biblical to you." She reached her inside jacket pocket and pulled out an envelope full of cash from the bank. "I thought you might be difficult to work with, which is why I came prepared."


He looked down at the money envelope. The snarl faded.


"More than enough to hire a cleaning lady," she said. "You've let this place go. Your grandfather must be turning in his grave."


He pulled the envelope toward him, carefully lifted the glued-down lip, and peered inside at the crisp dollar bills. He smiled. His crooked teeth were back.


There was a gleam in his black eyes she had never seen before. Ice shivered through her body and left through her tail bone.


This was a mistake, but it was already too late. He turned around and faced the painting that was behind him. Impressionistic in style, the painting showcased the first school for muses built in Athens, Greece. Although there were eight other schools around the world, this was their Mecca. A muse's holy land. Stewart gently touched the gold frame, rapping it just slightly, and the frame popped out from the wall.


"That secret compartment is ballsy," she said.


Stewart remained silent, slid his left arm behind and pulled out a rectangular package wrapped in brown paper. He handed it over to her.


"Do not open it until you are in the safety of your home," he said.


"Oh, Stewart," she said, "where's your sense of adventure?"


His nostrils flared, and he spun the giant book back around to continue his research.


"I don't want to see you again," he said as she was leaving.


"You won't have to," she said, and as she walked through the door, in the luminescent afternoon sunglow, she reached across the lip of the package and tore through the paper.


She finally had a copy of "The Argument Against Amusing."