She had dewy skin

The sentence she had dewy skin has appeared numerous times in books describing the breathlessly attractive female lead.

To me, this sentence doesn't make sense.

Dewy skin reminds me of my car's windshield in the morning. It's what's experienced on an early spring morning At first, it sounds nice -- the fragrant flowering trees leaving my olfactory senses illuminated with the prospect of warmer afternoons.

Then it takes a turn for the worse. 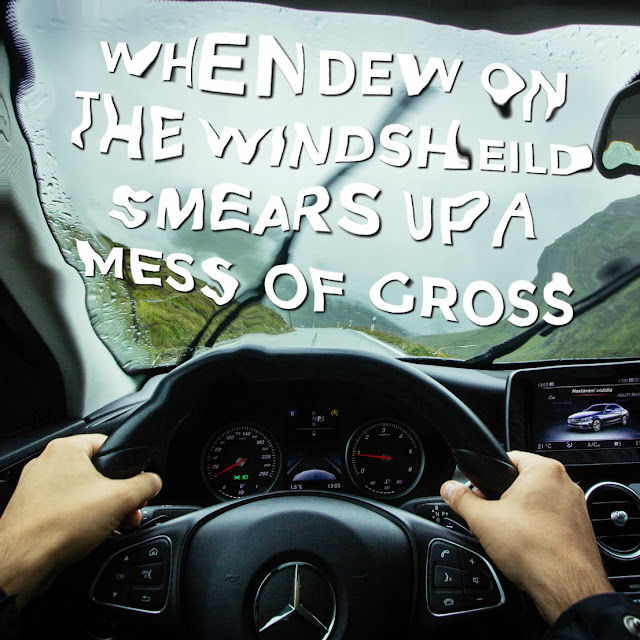 I open the garage door, and awaiting me is a soaking wet windshield. The large plate of glass is slathered with a layer of moisture squeezed from the air.

Rain from the clouds washes everything clean. It's cool and clean and creates droplets so refreshing, green lily leaves glimmer with these crystalline droplets of cloud water.

Ha ha! When you're out in rain, with no umbrella, on a scorched summer day, whimsy collapses around us as we soak ourselves in a refreshing shower. We sing! We jump up on light posts and dangle, reaching out with our left hand as we gleefully serenade the weather:

This is why dewy skin eludes me.

Moisture and wet should never be described as thick. Water is mostly transparent, therefore it is loose. Free. There's movement. It flows. There are trickles. It dances and glistens.

Do you know what else slathers? Icing. Mud. Creamy lotion.

It does not trickle, nor look fresh, and as I swat the windshield wiper handle to get rid of this layer of nuisane so I can drive, that delicious morning dew -- which is so oft written about -- begins to spear like bird poop as the wipers squeegee back and forth, back and forth, producing a film.

This dewy finish doesn't go away.

Instead, my wipers create smudge rainbows that I cannot see through. Now, driving is dangerous. I don't have time to wait for my defrost to heat up the glass to evaporate the dew. I'll be scorched by the fire of the car furnace while also being late for work.

And it doesn't matter, because the dew is too thick -- it has a higher evaporation rate than water. It's like waiting for a giant wad of spit to dry.

Since there are no options with dew, I go ahead and ignite the defrost at high temperatures and high speeds so I can drive to work. The heat from the defrost makes me sweat on this mild spring morning, forcing me to roll down the windows to cool off. The sticky dew dribbles in, droplets flying in from the speed of the car, landing on my face.

I get that skin finishes can range from matte to dewy; from luminous to effervescent; from sparkling to frothy; from contagious to flaky, but when books, movies, interviews and make-up commercials demand the look of dewy skin from the female masses, I think of my morning windshield.

A wet that smears.

"Thank you!" yonder co-worker replies back. "It's L'Oreal's new Cream Smear line. It's really thick, and I can never rub it in entirely."

I just don't believe that a woman's skin should be compared to my car's windshield in the morning.

It's just not very becoming.