My Social Studies Teacher in Middle School Was a Total Dirge

My social studies teacher in middle school was a total dirge.

And lucky me, I got to have him THREE years in a row. Do I remember anything from those social studies classes? No. No I do not.

There's this silly teacher meme-thing out there that states, "They may forget what you said, but they will never forget how you made them feel."

This is true. I cannot remember, for the life of me, what Mr. Jennings said.

But I can remember how he made me feel.

Some of you may have had a teacher that made history come alive. Not Mr. Jennings.

He put history on life support.

Instead of reviewing it or even talking about it, it sat there in our notebooks like a dead jellyfish washed upon shore.

Please join me for a moment of silence as we mourn those graphic organizers.

Mr. Jennings, like some wicked step-parent, held Venn back.

He drank himself to death.

I blame Mr. Jennings. He never talked about the graphic organizer on the board. Instead, we had to figure it all out on our own. We walked into that social studies room. Mr. Jennings locked the door, and it became an Escape Room.

Nancy Drew, The Hardy Boys, Tom Swift, nor the Bobbsey Twins could have figured out the graphic organizer to save their lives.

They would have all become MacGruber.

His teaching was so ineffective that I took it upon myself to type up chapter notes. Back when personal computers were becoming more of a norm, I logged onto the bright blue screen of the word processor and did my best to type out those chapter notes. Without the know-how of the QWERTY row, I pecked my way through those chapters, printed the notes on my dot matrix printer, and handed them to some of the other kids in my class.

I can't remember if they helped or not, but I felt like I had to do something.

Even the tests were just copied out of the teacher's edition.

Those are my memories of middle school social studies.

That and how one of my classmates saw Mr. Jennings outside of school once.

Remember, as a middle schooler, teachers didn't have lives. They were these strange adults we saw on a daily basis that weren't our parents. They didn't have lives, houses, cars or children.

Apparently, Mr. Jennings had all of those. According to my classmate, Mr. Jennings was outside his house, washing his car, wearing a pair of short yellow shorts.

We had just entered the 90's. Anything from the 80's was still game. 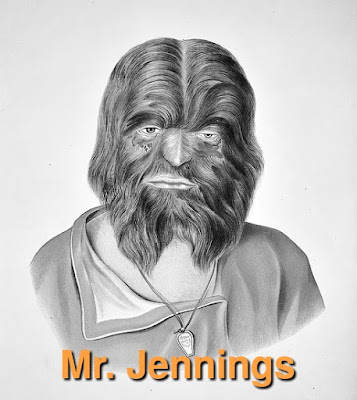 Mr. Jennings was a bear of a man. Chest hair pushed out from the opening of his opened polo shirt. His face was covered in so much beard you could barely see his eyes.

Mr. Jennings even had a pony tail!

He was follicles away from being Cousin It.

If his wife embraced him, she needed a machete to free herself. It was said he had children, but they may have never escaped his woolly hugs.

His body hair was like the Lost City of Z. Anyone he hugged became trapped.

Otherwise, I wouldn't be here today to regale the tale of bad teaching, useless graphic organizers, and Venn.