I'm having an identity crisis, Part I

As the saying goes, I feel like I am a jack of all trades, but a master of none. In my little online world, I have created three different identities and each identity calls for action. For the past few months, I've been trying get each one organized in my mind so that they can co-exist nicely, each one placed in a separate box.

My dream: To find a way to make a small side-income with one or all three of these identities. I work with students and get them to create, but the thing is...I also like to create. I don't want to just inspire kids to create.

I want to create, and each identity allows for such.

The logical side of me says: "Focus on just one. That's all you have time for."

But, I already own all three web addresses. And to be dramatic, my hand draped over my forehead, each one is a slice of my soul. To give up on one is to let a part of me die. It will cause the ultimate anxiety.

I know this because summer has started once again, and I've been running from being productive on any of these identities. I've been telling myself "I'm on vacation" and that "I'm giving my brain a break," and while this is all nice and true, ain't nothing going to happen if I keep saying I'm on vacation. The anxiety I begin to feel when I don't sit down and work on something starts to eat away at me.

I begin to do fleeting activities around the house.

You see, when I'm not working on any form of creation, I begin to get stir crazy. The anxiety my body produces starts to eat at my brain. It makes me want to crawl out of my skin. I know the antidote is to sit down and edit, write, design, and produce, but then I look at past work and decide that it all sucks, that I should just give up on everything.

What do I have to offer?

I scroll through my website and look to see what my niche is: Nothing. My niche is that I have no niche. Like, it's totally liberating. I'm just over here being me. I've decided that my blog is my notebook.

You see, I used to keep a notebook. Constantly. I took that thing with me everywhere. Eventually, it stopped being just words and became something more visual. Then, eventually, I stopped.

You hear from writers that you should always keep a notebook. You should take it with you everywhere. That, if you don't have a notebook, you're not a real writer.

I recently look through my old notebooks and realized why I don't keep a notebook anymore.

For some, the notebook is the birth place of ideas. For me, my notebooks were therapy, a place for me to dump all of my dealings with anxiety. Not all the posts were dark and angry, but a lot of them were. I find, when I sit down to write in my notebook, it tends to go back there.

I've dealt with this anxiety order for more than 15 years now. The last thing I need is for it to take over my writing. So, the notebooks had to stop.

Especially if I wanted to consider myself a humorist.

And instead, I pour what I would notebook into this, here, website, and by doing so, it's created a few niches of its own.

Can I say niches? Can the word niche be plural?

So, this is where some of my creative anxiety takes over
One of my identities is solidified here in My Bucket of Parts. The title comes from the toy Mr. Potatohead and his bucket of parts. Through high school and college, I collected Mr. Potatoheads. So, when column space opened up for the college newspaper, I volunteered to write one. I titled it: My Bucket of Parts. That was my sophomore year, and the experience of writing a column was one of the best teachers I could have. 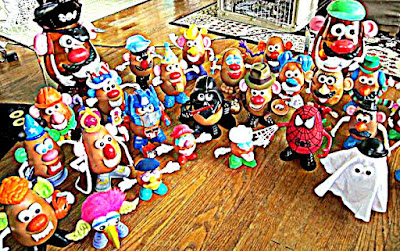 People actually read what I wrote, this I learned. I didn't have a huge following, but people shouted at me on campus a couple of times. They left comments online (when online comments JUST started), and having that audience became addicting.

They weren't reading some newspaper article to get facts, but paragraphs of ramblings written by yours truly.

And so one of my first identities was born.

After leaving college, I kept the name, eventually bought the web address, and worked through various mutations of My Bucket of Parts.

With the help of social media, I'm able to post and update and let people know that it exists. That's what I'm working on now -- getting readers. I know people can make money through social media and blogging, but I just want the people.

Getting a taste of it in college has never left me, and since then, I've been working on building some kind of audience.

And in the midst of that, MBoP has become my landing place for all things creative, it houses my attempts at humor and essay writing, book reviews, pieces of original design, my journey as I attempt to get published, random fiction and more.

So much so, that I feel like it's turned into some brand, and do you know what brands need?

Things that identify you're a fan of My Bucket of Parts.

The hard part, this is only one of my identities.

The other two are fighting for creative control.