Author's Note: Typically my Interesting Characters are a chance for me to write about a random fictional personality, an exercise to stretch my writing muscles. Today, I'm going to introduce you to a character that was a real person. I don't have all the pieces, but by God, was she an interesting character...but not in a good way.

I knew this girl when I was in high school.

Her name was Maria.

It was rumored she had a baby in her late teens but sold it.

Do I have your attention?

I don't even know how to begin this story or how I even came to know Maria. I don't even know if the baby-selling myth is true. I just know she was uncomfortable to be around, and I believe she took great pleasure in that. She was in-your-face weird; the type of person that was so against social norms that she did everything in her power to not fit in.

"There's no one else out there like me," she said, fitting in with all the other teenagers that acted like her.

Because she was different.

She was different alright. 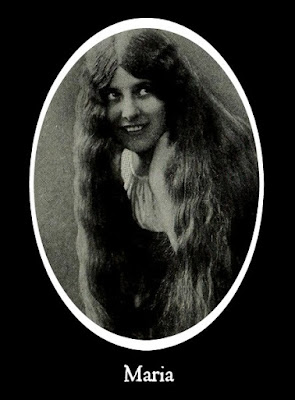 This is what I remember: As a teenager, she lived in an apartment on her own -- perhaps with her boyfriend Jeremy (he only had half a soul but that's a story for another day). My run-ins with her were few and far between, but every time she was around, I wanted to jump out the window.

Anything would've been better than being around the toxic mess that was Maria.

Like lying on the tracks while a train barreled over me, for one, or slowly making myself immune to cyanide, or hugging a porcupine.

Regardless, she was not a friend. She was a friend of a friend.

Isn't that how it always goes?

"I've got this friend," people say, while they talk about some cancerous personality that's stuck in their lives. Then they don't want to be associated with someone like that: "No, this person's a friend of a friend..."

I hung out with some misfits in high school, I'll admit, but Maria was not one of them. Maria belonged to my friend Beth. Maria didn't go to high school with us. She went to school in the next city over.

I do not know how Beth and Maria became friends, but Maria had her own apartment and wore a cape.

That's what I remember most about this enigma -- she sold her baby, and she wore a cape.

I'm not sure which one is worse.

My first run-in with Maria was when three of us went to her apartment to play the storytelling game Vampire: The Masquerade. This game, which is basically a role-playing game, allowed for people to create characters (which were vampires), and those characters interacted with each other, allowing for a story to unfold.

As a teenager, I loved a good vampire tale. As a budding writer (at the age of 14 or 15), of course I loved the idea of being a part of a story. I mean, games were my thing.

What? We're not going to play a game?

Instead, the two friends I came with left the living room with Jeremy. I believe they went to the bathroom with him, and they were gone for quite some time. Apparently, this is when they discovered that Jeremy had half a soul.

This left me with Maria.

The apartment, shrouded in darkness and Goodwill furniture, became a cavern of uncomfortable. One guy sat by an open window and smokedwhat I'm assuming wasn't just a plain, old cigarette. Another guy perched himself on top of the couch, unmoved, like a gargoyle. I'm sure there were other delinquents in the room, showing me all the ways bad choices could be made, but I don't remember them. I just remember that parents didn't exist in this world, but Maria did.

And I was stuck on the floor next to her.

We didn't talk. We didn't start the vampire game. It was just silence. Silence, Maria, and a bottle of tequila.

Well, a bottle of tequila, lime juice, and salt to be exact.

And as a 14 or 15 year old, fresh out of a small Catholic school and naive, I was ready to push the guy next to the window out of the way, so I could jump out of it and escape.

It was obvious Maria hadn't read or watched anything by Martha Stewart because she was a terrible hostess.

After we left the apartment, I knew I never wanted to be around Maria again.

Gaps of time had passed since the next time I had to deal with Maria. At this point, I was a tad bit older, less naive, and still friends with Beth.

Beth, who was still friends with Maria.

Luckily, my next encounter wasn't as dark, but it was filled to the brim with awkward.

It was a Friday or Saturday afternoon, and it was warm out. Beth asked me to go see the movie "Spawn" with her, and since I had nothing better to do, I said yes.

When Beth picked me up, though, there was an unexpected guest in the car.

I've got a feeling Beth knew all along that Maria was coming to the movie. She didn't tell me because she knew I wouldn't have gone. At this point, my loathsome feelings for Maria were evident, but Beth didn't want to be alone with Maria.

I don't think Beth liked Maria either, to be honest.

Maria was probably going to use some 90's witchcraft and steal half of Beth's soul and feed it to her boyfriend, Jeremy.

So, there we were, riding in the car, and only one of us wanted to be there.

But Maria was a fan of Sarah's music, too.

As the music played, Maria rolled her window down, sang along to all the words, and stuck her arm out the window and waved it up and down, up and down, like she was casting a spell on the day.

I already disliked Maria so much, but now she was desecrating Sarah McLachlan.

Then, we pulled up to the movie theater, and it was time to get out.

We all got out of the car, and that's when I noticed, to my horror, what Maria was wearing.

You have to remember, this was the 90's: She had on her light-colored mom jeans, a tube top, Doc Martens and the piece de resistance?

I was mortified to be seen with her.

I wore a mere zip-up hoodie and blue suede Pumas.

People stared at her, leaning their heads down to whisper to each other, obviously talking about her.

Normally, I would be all, "You fly your freak flag!"

She sold her baby.

Is this true? I will never know, but that's my final impression of this...Maria.

When it was revealed that she may or may not have done the aforementioned, I was like...