ere's the thing about anxiety attacks: I feel like we, as a human race, are ill-equipped to deal with the comforts of modern life.

There nothing wrong with improving the quality of life, which the above have all done. Yet, with such quality, why do we still fear and panic?

Along the way, with these homo-sapien creature comforts, the truest need for fight or flight, for the most part, has been eliminated.

I can't tell you the last time I looked death in the face because of the summer drought or the winter cold. I am blessed to not know what starvation looks like, and I can write and listen to music in the comfort of a house. I know these are blessings, comforts so many can't afford or don't have, and I try not to take them for granted.

There are times when things may not be going well, or our house isn't perfection, but I stand at the kitchen sink (because life is often talked about while cooking in the kitchen, where I am routinely washing dishes) and I say out loud that we have more than so many, that we are very lucky, and things could be worse.

Knowing this, knowing there's a safety within my life, what should my body do when the chemical response to fleeing or attacking still happens when there's nothing to run from or hit? 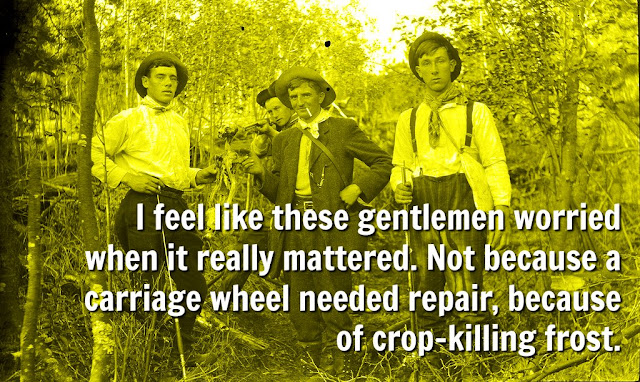 It may just be a car that needs to be repaired, my friends, but with someone with an anxiety disorder, the flight-or-flight response yells at me to run like the dickens.

Since it still exists, this fight-or-flight response is now referred to how our body reacts to stress, and that stress is not typically because we're standing in front of our enemy and it's kill or be killed.

Our body pushes out hormones like epinephrine and dopamine and serotonin because we may not stand in the face of danger, like death, but we do stand in the danger of: losing a job, owing an exorbitant amount of money for a repair, cancer, where our next meal is coming from, if we'll have a shelter, what our parents think, home repairs, comparison to others through social media, how a boss spoke to us and other mostly benign apparitions.

For some, this physical response to stress equates sweaty armpits, a little bit of worry, and the tension that singes the lower back. It makes sense because the situation calls for such a response. It is stressful. It may not be fight-or-flight, but it isn't comfortable, either.

For others, our physical responses to the phone ringing, the text message not sent to parents, or the email that says "see me" are physically debilitating. It ignites the response of 'what if' and 'why' and worst case scenarios that would make Stephen King proud.

For those with this disorder, the reason for the anxiety is kind of there, but the body's reaction is a little bit over-dramatic.

I know many that suffer from a nervousness akin to characters in an Edgar Allen Poe story. They, along with me, seem like people from the late-1800's as we suffer from weak nerves, our dispositions paper-thin and frail.

Although this is not really the case, I wonder if that's what people were dealing with when they were plighted by their nerves in the 19th Century. Were they really becoming a character from "Wuthering Heights" or "Jane Eyre" or did they suffer from anxiety?

Did their bodies lose the ability to cope as the modern world began to become more comfortable?

Sometimes I wonder: If I was a pioneer, living off the land, and trying to create a homestead worthy of survival, would I still suffer from generalized anxiety disorder? Or would the grit of life consume my every being?

It may, one day, become a topic I research. Until then, the reason my thoughts entwined around the idea of modern day life and fight-or-flight this evening was because of a long week.

Yet, as I stood in the kitchen, with no danger in sight, the flood of anxiety tried to creep up my chest and spill into my lungs. It wanted to collapse my breathing and infect my brain.

For a few moments, it almost did. The seams that hold me together were stretched from the exhaustion of keeping it together, but they did not give.

My breathing returned to normal, and I won. My anxiety attacked, but I smacked it down.

My fight-or-flight responses are very much alive today, but it's not because I need to run for my life or defend my homestead. It's because I feel the need to run from myself, while trying to find the strength within myself at the same time.