It's the chicken's time to shine, people.

The chicken saves the day. 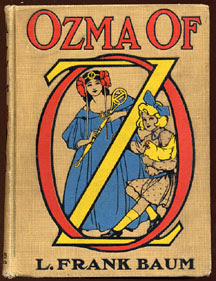 I don't know if I can eat chicken anymore because its...sorry...she is the savior in this book. It's a lady chicken. I pictured her wearing a string of pearls around her little yellow neck during her clucking adventures. I mean, she spoke, of course, but I don't know if I'll be eating the chicken sandwich from Wendy's or McDonald's anymore.

Those cows who want me to eat more chicken, well. Poor cows.

Before we realize the chicken is the savior, we find that Dorothy is back in this novel! She was missed in the second novel "The Marvelous Land of Oz." This time, instead of a tornado, she's cast overboard while traveling to Australia with Uncle Henry. She and a chicken float in a chicken coup and wash up on the shores of a land that borders Oz.

We're not in Kansas, Australia or even Oz, anymore, Toto. We're in the Land of Ev, but Toto isn't here, either. Nope, just the chicken.

At first, we're led to believe the chicken is a boy because its name is Bill. Then it begins to speak, and it has a lady voice. Dorothy decides to call her Billina, instead. The only thing Billina does is complain, poops one egg a day -- which is a major event -- and saves the day. Otherwise, Billina is a disposable character.

Besides of my obsession over the chicken, "Ozma of Oz" is a familiar tale...something I've seen in a movie...

If you were a child of the 80's, like myself, you might remember when Disney took a dark turn with its live-action movies. There were no songs, people died, the lighting was dark, and the movie "The Black Cauldron" was made.

During Disney's Goth Period, the movie "Return to Oz" was made. Close your eyes and remember this with me: Dorothy escapes the mental ward because of her constant talk of Oz. She returns to Oz, only to find that the Yellow Brick Road is in pieces, and the land is being ruled by some witch named Mombi (this character is actually from Book 2), and this lady could change her head. It was terrifying. I mean, the lady took her head off, placed in a cabinet, and then went over to another cabinet and pulled out a completely different head and put it on. How did she even know where she was going without a head?

As I read "Ozma of Oz," I realized that's where that movie came from -- sort of. Obviously, whoever wrote the screenplay adapted and then adapted some more, and then put it in their food processor and made pesto out of it, spread it on a piece of fancy toast and fed it to a Disney executive.

"We'll just skip the second book where Ozma is a boy, but here's this witch-thing that changes heads instead! It's less political!" It's just like the original "Wizard of Oz" when the one-eyed witch who was after silver shoes became a green lady with two eyes that went after ruby shoes.

Let's get back to the real thing: In this third installment of Oz, Dorothy meets the current ruler of the Land of Ev (the lady who can change her heads), but this ruler isn't evil -- merely bored.

It turns out the original king of Ev sold his family into slavery to some guy called the Gnome King. He did this for everlasting prosperity, but out of regret of his terrible deed, he kills himself. This left the head-switching crazy lady, who is the king's niece.

Anyway, because Dorothy sasses Head Switcher, she is held in contempt and placed in a cell high in one of the castle's towers.

Whatever is a girl to do?

While in captivity, Billina poops an egg. She really does. And the chicken is all Shakespeare about it, swooning with her wing over her forehead, and then holding the egg up like Hamlet, "Whatever am I supposed to do with these eggs I pooh?"

Dorothy is all, "Let me store your egg in my pocket."

And Billina is pleased.

The time spent on Billina's egg dropping is so weird.

Like, L. Frank Baum probably suffered from migraines, and his doctor gave him a jar of white powder -- what we call cocaine in these modern times -- and said, "Take two snortfuls of this and call me in the morning."

But instead of calling, Baum sat down, tripping, and wrote the first 10 books of Oz in one sitting.

And here I am gobbling them up.

Back to Dorothy: As she looks out the window, Dorothy realizes the Land of Ev borders a giant desert. Then, she see's reflections in the sand. What's coming? It turns out to be Ozma and her friends -- the Tin Woodsman, the Scarecrow, the Lion, a Tiger, and many more. They travel on a long rug that magically rolls across the desert because if anyone touches the sand, they die.

Dorothy is saved, Head Switcher isn't mad, but admits she's tired of ruling the Land of Ev because she's a Millennial. So it's decided that Dorothy, Ozma and their Squad will go save the Land of Ev's royal family, who are all currently held prisoner under the Gnome King's rule.

As they travel, Billina poops an egg.

When they get to the Gnome King's land, underground, we find him like a jolly old Santa Claus-type! Why, this man isn't mean! He's so cute and small and dirty from living inside a mountain. Let's squeeze his cheeks!

Then, we find out that the royal family of Ev aren't just mere prisoners, they've been transformed into objects placed around the Gnome King's palace. Because he likes trinkets.

He has done this with the help of his magical tacky 80's belt. It's wide, glittery, and looks like plastic. Even Liberace wouldn't have been found dead in that thing.

I wish "What Not to Wear" was still on.

With all the objects placed around the palace, and that tacky belt the Gnome King wore, it reminded Dorothy of Goodwill.

The Gnome King tells the Dorothy and the Oz Squad that they can save the royal family. Each person gets 10 chances. They just have to walk into Gnome King's Goodwill, touch an object, and if it's a member of the royal family, they'll change back! But after 10 tries, if the Oz Squad hasn't figured it out, then they each become a trinket to be kept.

For 20 pages, everyone is losing. People are turning into objects left and right.

No one can figure it out.

It turns out, the Gnome King has just too much stuff.

Then, one night, after Billina poops an egg, she nestles under the throne for the night, and no one knows she's there. It just so happens that the Gnome King is a typical bad guy who divulges all his secrets and evil plans at some point.

Aloud. To a listening audience.

"They'll never find out that the purple items in my Goodwill are the royal family!" the Gnome King says to one of his followers.

Billina tells the remaining survivors of the Oz Squad, and it's the chicken that goes into Goodwill and saves the day. She goes and touches each object with her wings and all is happy and yay.

The third installment of Oz wasn't nearly as trippy as the first two, which made it just a tad bit boring. I suppose, if I read it aloud with a British accent, it would be more entertaining. I do hope the fourth book has some whacked-out fantastical unicorn mutation that makes me cock my head and rub my eyes, because, let's face it, that is what's making these Oz books so enjoyable.