I was a coach once

I have a wooden nameplate on my desk that says my name and congratulates me for coaching for ten years.

My students look at it like it doesn't belong there.

"What do you coach?"

"I didn't know you were a track coach!" they proclaim. They practically throw their hands up in the air like Fraggles.

"Well, obviously, because track season hasn't started, and you wouldn't have come out for the team if it had."

"How long have you been a coach?"

These shocked statements come from juveniles that also don't realize how old I am.

"How long have you been teaching?"

"Twelve and a half years."

They never do the math. Ever. I've gotten away with saying I'm 24 and 25 for years now.

When they do find out my real age, they're even more amazed.

"Thank you, I use Neutrogena."

They just nod, as if saying, "it's working."

OHMYGOD, people. I'm just realizing that I've been in my profession for over ten years, now. But that's not why I'm here tonight. It's the side project that I held during my past 12 years of teaching. Something I never really considered myself, even as I was standing outside doing it.

Yes, my friends. This writerly, somewhat-artsy, non-athletic, kind-of-geeky mess was a coach. Of a sport.

Two events I never participated in. Ever.

I can't remember how it all came to pass, exactly, but it was when I was interviewing for my current position or it was when I accepted the position, and I went into the school to talk shop when I sat down with the athletic director.

The building was under renovation at that point and the poor woman was shoved inside a closet-sized room. It didn't stop her, though. She was a fireworks show of energy. I learned they had some coaching positions open, and I was honest when she said she had a track coaching position open.

"I never did track in high school or college," I said. "I just ran cross country."

This did not worry her.

"What better way to learn than in middle school athletics!"

This was her mantra. I could've been a football coach if I wanted.

Apparently, something clicked and the track position was mine. Later that school year, I walked out onto that track field just as naive about the sport as the sixth graders participating for the first time.

Here's what you need to know about teaching or coaching middle school: you can't let on.

Guess what: I let on, people. It was so painfully obvious that I had no clue what I was doing. Some of those eighth graders just looked at me like I was an old sixth grader. Nothing I said held any weight.

"Why am I even here?" I asked myself.

Because having a little extra money in the paycheck isn't so bad, is it fella?

And for twelve seasons, I was a track coach.

There are eight coaches among 200+ students (both boys and girls), and we help each other out and coach the team as one large unit. Kids are broken up by running ability: sprints, middle distance, longer distance. Since there are eight of us, we are also able to become experts in various events. We have coaches work with the distance runners and sprinters, the hurdlers, the long jumpers, the high jumpers, and the throws (discus and shot put). As the new guy 12 years ago, I just filled in where they needed me and started coaching long jump.

That lasted only two or three seasons because things change, coaches leave, and staffing shifts. The high jump coach left. A new coach came in that season and because she went to State as a high school long jumper, she took over that event.

So, I walked down the football field to take over at the high jump pit.

After gaining some credibility as a coach for a few seasons, I had to start over. I knew just as much about high jump as I do about foreign policy.

Thanks to YouTube, reading articles from the Internet, and bringing in parents who jumped in college, I loaded up my coaching toolbox with ideas, warm-ups, and know-how. And after years, I became pretty confident...at least for middle school high jump.

The fruits of my labor revealed itself this season. I talked to my jumpers about the history of high jump and what it looked like before the Fosbury Flop. I showed what the Western Roll looked like, and during one of our final practices, we all tried our best to perform the Western Roll.

None of us were very good.

But even though they knew I never jumped in high school or college, I still knew what I was talking about, and they trusted me.

My ability as a coach really showed its teeth during this, my final, season. One of my boy jumpers was a tall eighth grader. He stood about 6 feet 1, and when he jumped over the bar, he had decent height, but terrible form. He was lucky to get over 4 feet 10 inches. I just knew he could do better than that.

I wanted to end my tenure with such a jumper.

One day at practice, I pulled out a trampoline, raised the bar higher and forced him (and the other jumpers) to not just jump over the bar, but to work on their form, to arch their backs, to kick their legs, to jump up.

And it worked. His form changed. He went from soaring over the bar looking like a person who fell out of a chair, to a jumper with the form of a could-be State jumper (albeit, a little stiff) and a great kick of the legs as he soared over the bar, making him roll toward the edge of the mat so he could easily get off.

He went from 4 feet 10 inches early in the season to 5 feet 5 inches during the Hamilton County tournament, placing him fourth. And although that doesn't seem like much, you should've seen the the top three jumpers. They were almost jumping over 6 feet. These kids could practically leap over me.

It's not always about the points scored during a meet. Sometimes, it's about the journey. 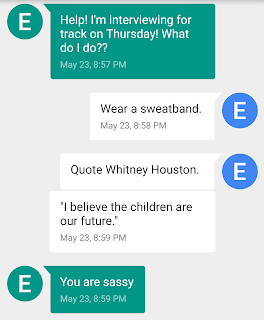 And speaking of journey, my twelve-year journey as a coach ended this season. I enjoyed coaching, had fun, but it's not a calling. My heartstrings were never pulled, and it was never a passion of mine. I noticed last year the pull for me to resign, that I was beginning to resent the time it took away from my teaching and free time, rather than enjoy it. I stopped looking forward to the meets, of running the high jump events, and decided after twelve seasons, it was time to give up the helm to someone new.

I know a few co-workers that were interested in the position, and I'm sure the position has already been filled, but one of my friends at work texted me one night a little nervous about interviewing for the position.

He asked me what he should do.

I told him to wear a sweatband and quote Whitney Houston.

I think I did a good job passing the baton.