The good thing about a series of books is the second book and every book after are very easy to get into. It doesn't take 30 pages or 100. It takes mere sentences.

And although I already knew the characters of "Hollow City," and could comfortably get into the story, I felt the second book moved slower than "Miss Peregrine's Home for Peculiar Children." There is plenty of action, enough dialogue to move the mythology forwards, danger at every turn, but there was something within the story that still felt stiff.

It doesn't mean that I enjoyed the story any less. I am merely comparing it to the compulsively readability of the first book. 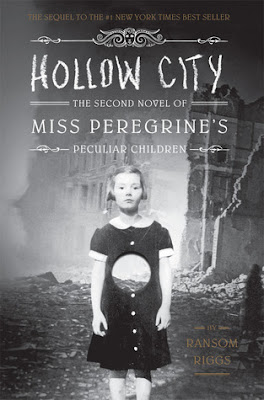 We've got Jacob, having decided to remain in 1940 with his new peculiar friends, and they have left the island the children have called home for 70 years. Miss Peregrine is stuck in bird form and the only thing they're working on is finding a way to change her back. Wights and hollowgasts are at their every turn trying to capture the children for whatever reason up their sleeve. We jump in and out of time loops, meet new characters, and by the end of the book, there's a twist I didn't see coming, and then a deeper dig into Jacob's own peculiar ability.

By the closing of this book, I just had to dig into the third novel. Luckily, I'm reading the series now that all the books are out.

What Riggs does well with "Hollow City" is leads us down a path that we're not quite sure where to look. I'm not making any predictions, and I'm just enjoying the story. The group of kids begin to realize they are quite capable defending themselves with the combination of Jacob's ability to see the invisible Hollowgasts and their own abilities of strength, fire, insects, etc.

They are captured multiple times, always nose-to-nose with danger, but they become less afraid and stop being defenseless children and turn into heroes whose abilities can be quite dangerous. They are running through war-torn London, where sirens and bombs are going off, and it's no safer being a normal person than it is being a peculiar at this point.

Danger really is at every turn, and it seems exhausting. Like, it's either a man with white eyes and no pupils, a Lovecraftian creature coming after you or WWII Germany. And within these exhausting moments, we're introduced to new characters and new peculiars, and a little bit of the history that surrounds, what Riggs calls, "peculiardom."

The mythology he has created within the world of peculiar abilities, ymbrynes who create time loops, and creatures that are invisible to the normal and peculiar eye is limited. We find that because of the wights and the hollowgasts, peculiars have gone into hiding instead of researching the lands and loops throughout the world.

We also read from a book of stories called Tales of the Peculiar, which one character reads to help the group as they realize the stories are more than stories but clues.

All the history and artifacts (like maps and and old building covered in ice) help the children and make the story and world they live in that much more interesting.

Maybe the story doesn't move too slow, now that I think about it. I picked it up and put it down a few times, not out of interest, but because I tend to read more at the pool during the summer. Sitting down the other day, I went from page 160 to 350 within an afternoon.

And I'm a slow reader.

And yes, it does help that some of the pages are old black and white photographs. But still...

In the young adult world of dystopia, zombies and tragic love stories, I'm happy there's a dark gem out there with Miss Peregrine and her young wards. That takes place during WWII. That involves mild elements of time travel, weird abilities and horror. That is written by a man named Ransom. With moments where the characters don't take themselves too seriously.

Stories like these are the reason I return to genre fiction again and again.

If I want real life, I'll turn on the news or teach my journalism classes.

And with that, I delve into the final installment of these peculiar children with "Library of Souls."