This book was slow-moving, deliberate, delicate, and dangerous.

Many people picked the book up for its use of eccentric photos, all real, mind you. That was one of the reason's I didn't pick up the book, at first. I flipped throughout, didn't quite understand the use of the photos, didn't read the inside flap, and went on my way.

Then, the Internet of Things became enthralled with the trailer to the movie. Directed by Tim Burton. 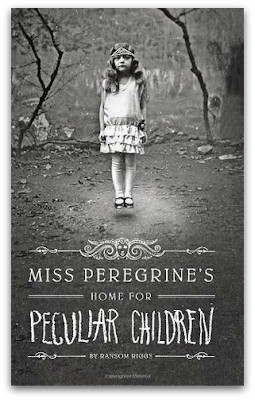 And I watched it.

And I said, "What was I thinking not picking up this book?"

It's so Harry Potter of me -- as in, it took me years to read the series only finding that I absolutely loved it.

This is the same for "Miss Peregrine's Home for Peculiar Children."

This time it hasn't been over ten years.

It took me no time to get into the book, and even though the meat of the plot doesn't expose itself until about midway through the novel, I was still so interested in the main character's journey.

Jacob Portman, a 16-year-old surrounded by his family's business and wealth, tries to feel sorry for himself. Living off of stories told by his grandfather, stories about being a part of an orphanage when he was a child, a home for youth that was on an island off of Wales, showing Jacob numerous photos that were just too peculiar to be real, it's a relationship that is unique to the two of them. Nobody else in the family is able to get into the grandfather's world. His life was a mixture of solitude, paranoia and mystery. Jacob, for some reason, is special.

But, as a teen, Jacob knew not to believe those stories anymore, thanks to the skepticism thrown onto him by his family.

Then, one day, while checking on his grandfather, Jacob finds the Florida house empty. Something is wrong. Jacob travels through the backyard, which backs up to some wild lands, and finds his grandfather lying on the ground, and it seems he is dying.

The police say it was a wild animal attack, Jacob thought he saw something other-worldy, but couldn't quite come to terms with it, and when he does tell the truth, the police believe his mind's playing tricks on him, while the psychiatrist he goes to see tells him its acute stress syndrome brought on by the murder, er...death, of his grandfather.

Months later, a message gets to him from the pages of an old Ralph Waldo Emerson book, which reignites his interest about his grandfather's past. He's decided that, during the summer, he wants to travel to the island of Cairnholm to learn more about this home where his grandfather lived.

And then the real adventure begins when Jacob learns the truth about his grandfather, as well as the truth about himself, leaving him far more valuable to the orphanage when he finally stumbles upon it, somehow stuck on a day of September 1940, seconds before the island is bombed during WWII.

Creating a dark history about people with peculiar abilities, not to help save the world, but to hide from the world to stay safe, Ransom Riggs weaves together a story that teeters on the gothic. The children, as is any peculiar, is not safe in the world since we learn there are wights and hollowgasts in search for them. People who were once peculiars striving to become something akin to human, once more.

And then some. Just like any book of this nature, an evil plot is afoot.

Simpletons in reviews said this book was akin to a literary X-Men, where Miss Peregrine is the students' Professor X. Although it features similar elements from literature and movies like time travel, strange abilities, WWII, and an evil plot, I find that comparison to water down the concept and cheapen it, much like reviewers calling the trilogy of "The Magicians" by Lev Grossman a "grown-up Harry Potter" (which I disagree with vehemently).

If anything, this YA novel allows for students to safely travel into a darker world, a taste of the gothic, without completely giving themselves to complex stories scribed by H.P. Lovecraft.

Although, what Riggs has created is a bit of a gateway book. Maybe even for me.

I look forward to the next two books, finding out where the journey of Jacob and his friends will lead, as they try to help Miss Peregrine, look for others like them, and fend off more hollowgasts and wights.
Labels: book review