"A Monster Calls" by Patrick Ness

Short and powerful, "A Monster Calls" by Patrick Ness left me speechless. For some, it'll leave them sobbing. For me, it left me quiet. 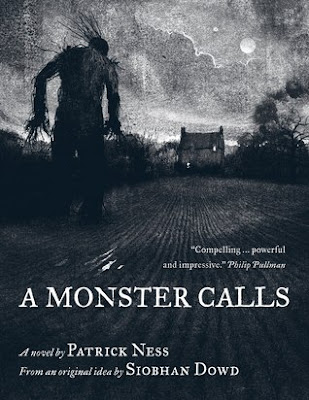 Conor's mom is ill. Conor keeps having the same nightmare. Conor is being bullied at school. And one night, a monster, which looks like the yew tree in the graveyard close to Conor's house, visits.

And Conor is not afraid. The monster tells Conor that he called him, but Conor doesn't know why.

There's a few witty retorts between the monster and the boy, how the boy's just not afraid of the spiny, tree-like beast. The monster is definitely not the boogeyman we are used to, but he is still a boogeyman, and he tells Conor that he's going to visit three times to tell Conor three different tales.

But, then, on the fourth night, Conor has to tell the monster a tale -- and in this case, it's the truth. The truth of Conor. The truth of what he's going through.

And that is what terrifies Conor the most.

The language is stark. The monster becomes a creature of comfort, and the real beasts in the story become his grandmother, who is icy, and his father (divorced parents) who's traveled from America (the book takes place in the U.K.), who is aloof.

The author never relates what Conor's mother is suffering from, but he doesn't have to. Instead, we are subjected to the cruelty of the bullies and his inability to get into trouble, even if he's caused damage, because of what he is going through.

At one point in the book, Conor is almost relieved to have the principal punish him after beating up on the bully, but because the principal knew that the bully was a bully, and since Conor's mother is terribly ill, no punishment comes.

The normal emotional consequences don't apply to him right now.

Young adult literature, anymore, are like Pixar movies. They may seem like they're aimed at a younger crowd, but the stories are for everybody. Black and white illustrations make their way throughout the book and they are welcome additions to the story.

Everything from the starkness Conor feels, to the strangeness of the monster and the fable-like tales the monster regales, this book is short and masterful. It's bittersweet and heartbreaking.

It's exactly what a book with a monster in it should be.