I'm sorry, but did you say rice pilaf?

You might as well put straw on my plate, under the chicken.

There's nothing worse. Please add unpleasantries to a dish, would you? And don't tell me, "Well, you haven't had my pilaf recipe, yet."

It doesn't matter -- it's terrible. All rice pilaf is terrible. It is dry and tastes like wilderness. Then, as I chew, I chomp on one of those dark brown rice pieces and start to cry, wondering what I ever did to rice to deserve such torture. The only time it can be salvaged is when the chicken (and it's always chicken) has enough sauce on it to turn the tumbleweeds into something palatable. 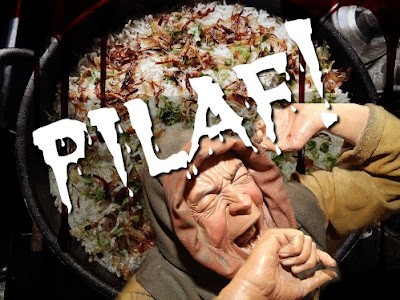 Rice is a grain I can get behind. It goes with everything. I've even seen people mix brown sugar with it and eat it like a desert or oatmeal substitute.

But the minute you pilaf it, you've killed the rice buzz.

Usually, when served at a restaurant, it sits on the plate and cries, feeling abandoned. I push it around, trying to avoid it.

It's that person at a party you really don't want to be around.

Sometimes the shrimp that sits on top of it leaves a little sauce behind, not enough to salvage its beastly blandness, but it's like the shrimp says, "Here, but that's all you get."

The shrimp almost feels sorry for it. The rice gets the shrimps' hand-me-downs.

I've got a feeling I'm not alone in my disdain.

I'm going to start a show on Food Network called Pilaf Peregrination. I will travel around from city to city tasting restaurants and home cooks' rice pilafs. I'll sit down, showcase my woe for all things pilaf, and then try it out. If a palatable pilaf is served, I'll be one step closer to changing my mind about the particulars of pilaf. After 100 palatable pilafs have been pecked at, I'll change my tune, delete this post, and rescind my pilaf outcry and just eat it.