Virtual reality has a place in the journalism classroom

When I found out that New York Times was sending subscribers a Google Cardboard headset, my ears perked. A news organization entering into the world of affordable virtual reality?

Google Cardboard is Google's answer to virtual reality using a smartphone. Just turn your phone sideways, place it into the viewer and the screen splits in two. When the headset is held up to the eyes, each eye looks through a lense and it's just like Mattel's View Master -- images and video become three dimensional.

So, when the NY Times decided to start telling stories using virtual reality, the teacher in me said, "I WANT MY STUDENTS TO TELL STORIES USING VIRTUAL REALITY, TOO!"

To do so, I need 16 GoPro Hero4 cameras, a plastic circular device for them to all sit in, the ability to edit all the videos into one spectacular story and probably $4,000 to do it all.

That, and on GoPro's website because I need to sign up to see if I'm even eligible for such a thing. 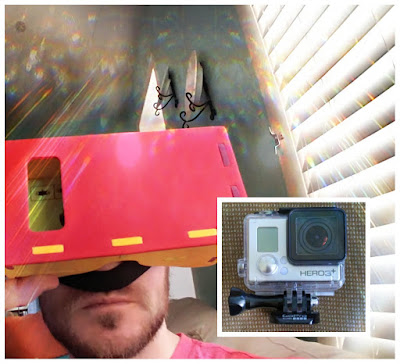 Here's what I'm thinking -- why not, right? Why wouldn't GoPro and their Odyssey contraption want a middle school journalism program to start using its magnificence? How amazing would it look to see mini-teenagers creating virtual reality content?

"And the best middle school journalism teacher award goes to..."

What if I write Trump to send me a $15,000 check to promote education? In my letter, I'll write: You will have my vote if you adopt my journalism program and help me get my students to tell virtual reality stories.

Maybe Google will fund me.

"Um, Google? Do you want to fund a middle school journalism program's use of the Odyssey rig so we can create virtual reality news stories? You can use our content for free as a marketing ploy!"

Granted, we won't take our viewers to Syria or up in space or down underwater, but we will take you into the world that is far scarier.

The wilds of middle school.

Live and see what it's like to be in the orchestra. Immerse yourself in mixed media. Understand the concepts of floor hockey. There are so many stories we could tell that would capture fellow middle school students' eyes, and then every kid would want to take my class and my journalism program would become unstoppable!

For now, it will be a dream, but I'm not totally shelving it just yet. Since this consumable virtual reality is still fairly new, the cost is going to be high. But like anything, I may get to see that cost go down, and the story about what it's like to be a principal told in 360 degree virtual reality just may be around the corner.