"The Story of King Arthur and His Knights" by Howard Pyle

Havest thou forever been a fan of Arthurian Legend?

Hark! For the most chivalrous review is almost upon thee. When thy picketh up thine blue and red jacketed novel of knightly splendor, you willst be projected hither unto a story so bright, you'll wishest upon thyself a darker tale.

I've been a terrible reader as of late. I read all the time that a writer must read. "You are not a real writer unless you're constantly reading!"

And so, to earn back my "real writer" status, I asked for a plenty of books this past Christmas: all of Edgar Allan Poe's stories and poetry in one large book, ten of L. Frank Baum's "Oz" stories split between two books, and Stephen King's latest compendium of stories, "The Bazaar of Bad Dreams."

Over winter break, I sat on my throne of lies and announced, "I will read all of these."

And so, I started with "The Story of King Arthur and His Knights."

Sure, I saw it was written in the 1800's, but I've read plenty of things from that century and centuries before. I could handle it. 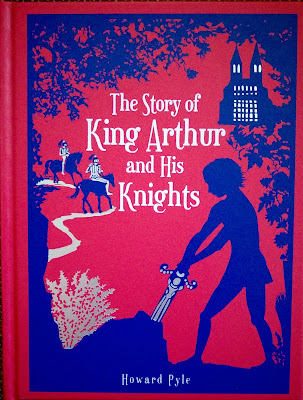 And then I picked it up and the language bespoke to thine nature in the most loathsome of factions. Beguiled was I when reading some of the pages, as some of it was simple trudgery.

My grand dream of reading a few books over two weeks turned into a gnashing of my imagination through the simple, yet uncomfortable language of King Arthur and their overly polite, egotistical ways.

Sure, being chivalrous sounds great, but these stories were more than just a knight holding open a door for a lady. These knights looked for trouble. They found a gaggle of women, proclaimed that they were a just and winsome knight, and then rode off to a castle to fight that one knight all dressed in black, only to lose.

Well, except for King Arthur since he carried the enchanted sheath of Excalibur.

(Until he loses it because he's blind to the evils of Morgan le Fey.)

The basics are covered. We find out Arthur was always royalty. He was the son of Uther Pendragon, the famed king of England that united the realms until he died. But Merlin foresaw danger in Arthur's future, so he was whisked away in the middle of the night, never to be found again.

At least, until Merlin puts a sword in a stone, and prophesied that the broken lands of England would be unified by a new king.

I think Merlin was just a soap opera writer looking for work.

We learn about the enchanted Excalibur. There are a few journeys. Morgan Le Fay even makes an appearance. We find out how Arthur fell in love with Guinevere.

It's all there, but it's very chaste.

We're missing the dark spots that help make Arthurian legend so interesting, and so, oh, you know, rich people with problems.

There's no Lancelot, which also leads to there being no affair with Guinevere. There is no Mordred. There was the fall of Merlin, but Pyle made this sage of a man a mere slave to his hormones when a young lady is the reason he's overthrown.

Like, c'mon! Really? You've been alive for who-knows-how-long and all of a sudden some Taylor Swift makes you swoon?

Of course, it's all by spell, but still.

If you want to be fancy, pick this book up. If you don't, go after "The Once and Future King" by T.H. White.

You can thank me later.