The adult's brain, for the most part, is fully developed. And sure, adults can be super-difficult, especially when set in their ways, but are the adults you work with little hot messes running around with cell phones thinking every life decision is going to make or break them?

And don't even get me started with Snapchat.

About four years ago, as technology became a bigger part in education, with amazing tools, websites, applications, and such, my district rolled out something called "bring your own device."

Working in a socio economic landscape that is fairly well-off, students were able to bring their own laptops, their phones, iPads, tablets, Xerox copy machines -- you name it. With those devices, it expanded the computer availability in my room.

I'm lucky to have a working lab of 17 computers that I don't have to share with anyone, but when 30+ students walk into the room ready to type a story (and I don't do handwritten, sorry), this becomes a bit of a problem since the tech-to-student ratio is low.

I can't be an old-school journalism teacher. If I'm going to matter as a class, I need to make sure I'm having my students do the things that their high school and professional counterparts are doing. This involves everything digital.

Laying out a newspaper/magazine (also called "pagination") doesn't happen with paper and glue -- it's done on the computer, where we don't really have to waste paper anymore. Designing the yearbook uses a full-blown online program supplied by Herff Jones that allows us to custom-create a stunning hardback book that encapsulates the school year.

I'm no longer just teaching writing, photography and graphic design -- this year, I've thrown in the basics of video filming, editing and shooting.

All these things require technology, so it's nice when a student can write a story on their phone and use their phone/iPad to film/edit video, which frees up the computers for the programs that can't be used on phones.

Until the phones take over.

And believe me...they've taken over. 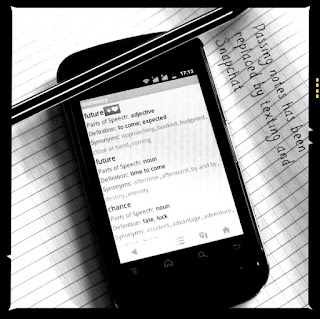 I wish I had a device that shot some kind of electro-pulse through the air that would disrupt my students' phones.

Because, seriously, people, I am really tired of my students making ugly faces at their phones and staring at their crotches. I understand they're incapable of seeing the big picture, but those little screens sometimes makes it impossible to see any picture at all.

The plus-side to this extra technology was mentioned above.

The down-side? Let me count the ways.

Do you know how fast a student can whip out their phone and log onto a game the minute they're finished with a task? And do you even realize how many ugly selfies they take of themselves so they can send them with some benign and unintelligent comment using Snapchat?

As long as they're getting their work done, putting forth the effort to be a good journalist, and being a mini-contributor to society, I don't mind if they check their Instagram, reply to a quick text or the like. We, as adults, do it.

I can't be a hypocrite.

But when the phones have taken over and they think their little social lives are more important, this is when I want to send out the electro-pulse. Something to cripple their ability to be really annoying with their devices.

That way they can pay attention to the task at hand.

Then again, remember when students were passing notes and not paying attention before phones were even a thing?

This battle I'm fighting is the same battle all teachers have been fighting, it's just using a different set of artillery.