Cheap virtual reality is cheap and it makes you giggle

I realize Google can be seen as evil, and there's conspiracies that it's the right-hand of the government, spying on us, but it also allows me to run my website for free, and my school uses a bucket full of the tools it offers for education.

Maps is also nice for traveling.

But, when it comes to the wiles of computer technology, though, I can't understand the language of coding, nor can I sit down and write and create an app that you can download to your phone.

I wish I could because that's (supposedly) where the money is today.

Instead, I just get to be very interested in what Google is mixing up in its cauldron. I may not be able to create it, but at least I get to use it.

Every summer, I follow their I/O developer conference online, attending from my recliner. I don't watch many of the videos, but I do read the articles on tech blogs and magazines about the new technology Google introduces.

About two years ago, I read a blog post about how all the attendees received a cardboard cut-out that turned into a weird set of goggles.

Then, the attendees placed their phones into the headset, after downloading an app, and they were thrust into a low-cost world of virtual reality.

I know virtual reality isn't new, but it's something that was never at our fingertips. Not like this.

I mean, I remember going to Blockbuster's Block Party when I was in high school...

...wait...do you even remember Block Party? The adult arcade? It had a giant playplace, games, food, other things like those chairs you sat in that moved around while the movie screen moved around and it was like you were on a rollercoaster...you know...moving around.

But what made Block Party state-of-the-art was its virtual reality stations. There were two of them, and you could place the hefty black goggles on your face and play some kind of virtual reality game...for, like, $10.

The line was always long and my adolescent brain could handle the wait. Nor, did I want to pay $10 for a few minutes of my time.

Jump ahead 20 years, and now we just place our phones sideways into a set of cardboard goggles and, walah! Instant immersion. 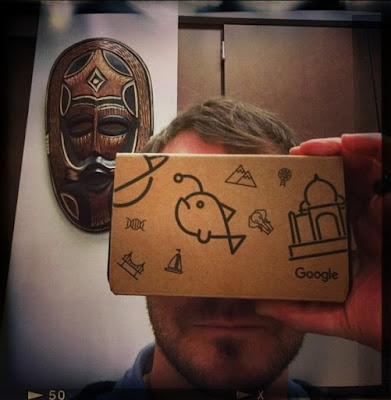 When I first read about Google Cardboard, I thought it was cool, but it wasn't available to the consumer. I could've made my own viewer, but I didn't have the patience or the engineering know-how to put it all together. Even though there were instructions, it looked more difficult than IKEA furniture.

Over a year later, this past November, the New York Times mailed out viewers to their subscribers. It was their way of telling the world, "Hey, we're going to start using virtual reality, too."

That's when I finally got on board. Now, the viewers are easy to purchase (we don't have to make our own!), are inexpensive, and come in a variety of materials, colors, and designs.

I bought a multi-colored foam one that seemed more sturdy than the basic cardboard.

When my Google Cardboard viewer came in the mail, I put it together, placed my phone in it and started to giggle.

That is the initial response. It's simple amazement. It's 3D. You're sitting on the floor in your living room. It cost you no more than $12, and it's not "Avatar."

Because I knew there was major educational value in this little contraption, I took my Cardboard headset to  school and showed it off. My fellow staff members were excited to see that a smartphone turned sideways could become a virtual reality conduit.

And everyone that put it on giggled and gasped.

I'm sure the biggest, toughest, manly man would put on the goggles and giggle.

Their catch phrase should be: Google Cardboard gives you the Google Giggles.

With some research, it was discovered by our media specialist that Google was using this virtual reality experience by incorporating it into education. Something called Google Expeditions was making its way around the country, and we found out that they were going to come to Indiana.

So, we signed up.

On January 27, a representative from Google came with 60 headsets and some tablets. The headsets all had smartphones in them, and with the help of the tablet, the teacher picked an expedition (traveling to space, going to the Taj Mahal, walking the Great Wall of China, looking behind the scenes at what a photographer does for the American Museum of Natural History, and more) and led the students through a field trip without leaving the room.

The nanoseconds those Google Cardboard viewers touched the students' faces, they all emitted a sleugh of Google Giggles.

The students turned around, looked up and looked down, and wherever they were, they could see the sky, the ground, and all the details. Although Google Expeditions doesn't use video, it's still amazing because it's like the students were standing inside a photograph. You could visit the same Expedition twice and see new things.

And now I'm hoping to bring it to my classroom. I'm not quite sure how, but since the New York Times is creating content, there's definitely a way to incorporate that into the journalism classroom.

Maybe eventually, my students could start creating their own virtual reality content.