The Pumpkin That Wanted to Be a Pie

Because the Holidarian celebrates all things holidays, one of the biggest boxes of holiday joy comes from the Fatty Fats that corner us in the dining room with whip cream foaming from their mouths, dripping off their candied ginger fangs.

We feel threatened, press our palms against the walls of our gingerbread house and try to recall all the different Keto Diet recipes on our Pinterest boards, saying their names three times, like Beetlejuice, hoping they'll come and save us.

The Holidarian isn't going to let them save you.

The Fatty Fats are the Holidarian's friend.

Well, within reason. The Holidarian likes to practice moderation. He's no glutton. Although, he might've seemed such on Thanksgiving Eve while he whipped up not one, not two, but three different desserts. His guests, the next day, also brought desserts. There were five different options between nine people.

The Holidarian cares. He likes to make sure his guests have options.

For the past three years, a small sugar pumpkin has clawed its way into my kitchen, begging to be used as pie and not a Jack o' Lantern.

It sprawled out on my red cutting board, next to my orange-handled knife, and begged for its guts to be ripped out.

"But don't cut a face in my glossy orange flesh," it cried out. "No. I wish for you to scoop out my stringy, seeded guts, slice me in half and bake me." 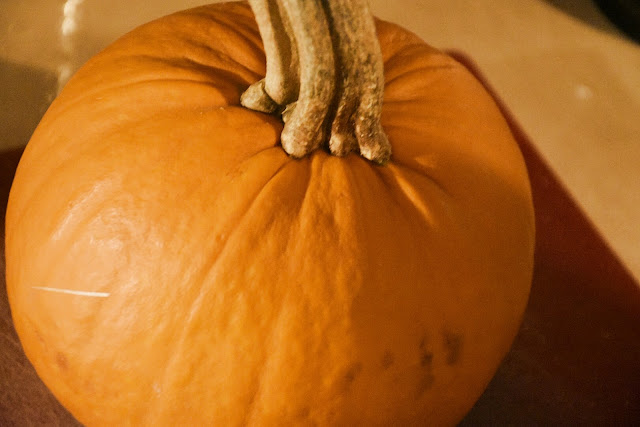 I gave in to its demands, grabbed the knife and hacked.

Or tried hacking. The skin of this year's pumpkin was solid like limestone. It took some time as I muscled the blade into it, pulling the handle down. Once the pumpkin was successfully split, I took a grapefruit spoon to comb out the bright orange stringy bits that clung to the pumpkin's walls.

The pumpkin sighed with relief. Now halved, it was enjoying a much needed massage, like a Q-Tip in the ear. 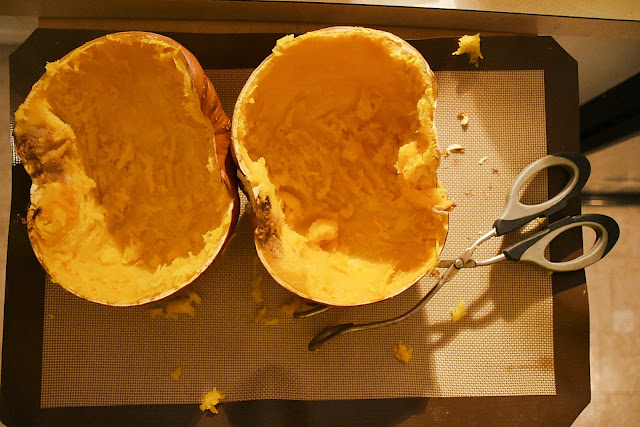 I rested the pumpkin face down on my artisan silicone baking mat, because, seriously people, the Holidarian has refined taste and bakes with only the most sophisticated of equipment.

But he didn't use that this year. Instead, he used his Kitchen-Aid immersion blender, with his pinky in the air. 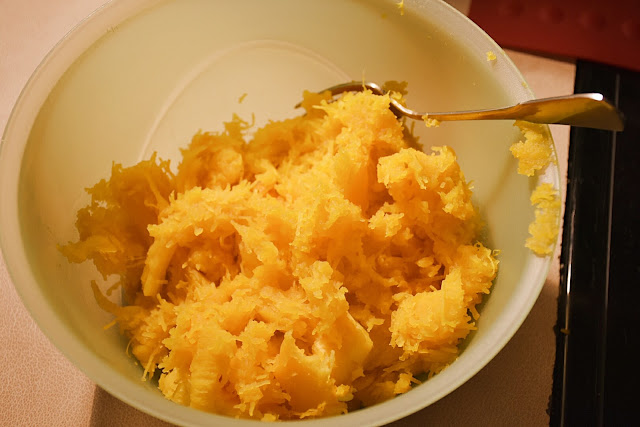 This year's pumpkin was the easiest out of all the pumpkins I have baked. With the past two pumpkins, I was impatient. The minute I pulled them out of the oven, I wanted to get the flesh scored out right away, but the skin just peeled off -- I couldn't pick up the pumpkin. I quickly yanked at the pumpkin, pulling bits of skin off, trying not to scald my fingertips, with the staccato of a Whack-a-Mole game.

Not this year's pumpkin. Although that limestone skin was difficult to cut through, I was able to hold it with tongs and scrape out its guts.

The pumpkin had sacrificed itself for my pie, and I bowed to the bowl of mush and thanked it. 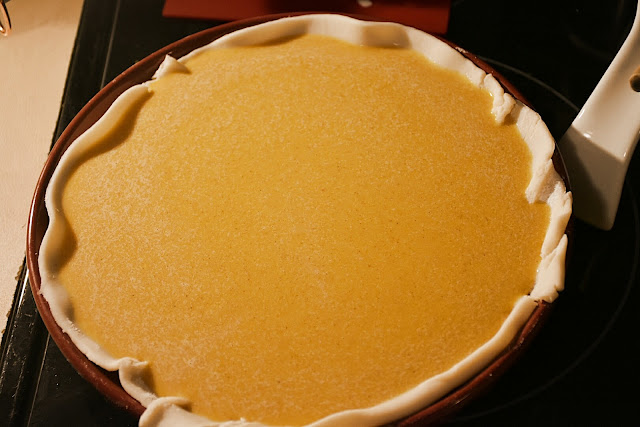 I poured that mixed-up nonsense into that crust and baked it.

The directions read, "425 degrees for one hour."

That didn't sound right to me. This was a different from-scratch pie recipe compared to years past, but one hour on such a high temperature just didn't add up.

I, later, realized those instructions were for the crust only.

I rescued the pie long before the hour, with toasted edges and a caramelized top, and I told my guests, "Why, it's a creme brulee pumpkin pie." 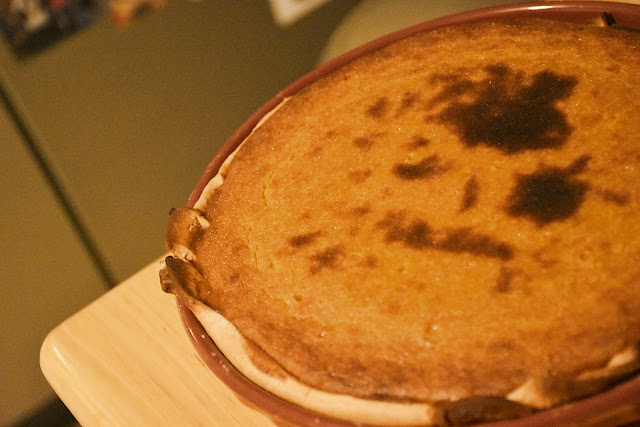 Now that I look at those dark marks on the top, I realize that they have a distinct resemblance to Jack Skellington from "The Nightmare Before Christmas."

I failed that poor pumpkin. It didn't want the face of a Jack O' Lantern, and in pie-form, it got one anyway.