When we first go married, hosting Thanksgiving wasn't even a thought in our minds. Well, it was, but we shooed it away and said, "hell-to-the-no."

There just ain't no way.

Like, you've got to build up stamina in order to procure something of that nature. We spent Thanksgiving with my wife's side of the family, took Friday off, and then spent that Saturday with my side of the family. It all worked out. Every family member and memory had it's own nook and cranny.

Actually, that's not true. Thanksgiving weekend used to be jam-packed with festivities and travel, much like this: 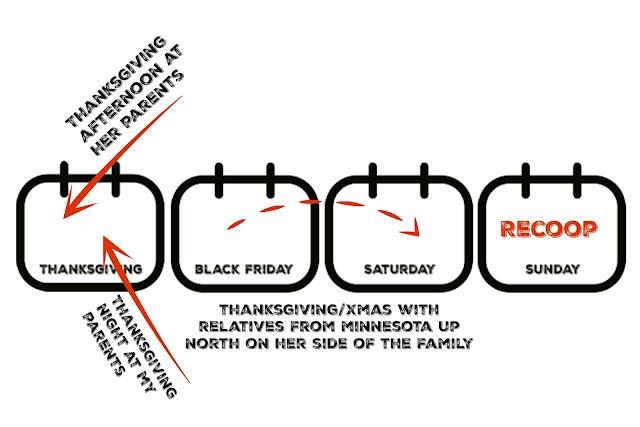 We traveled back in time to Ancient Rome so we could use the Vomitorium after all the eating.

Thanksgiving was definitely a whirlwind, but the threat of having to host it was years away, since, at that moment, we didn't own a house.

Once we did get married, and my brother was married, and there were multiple families to work with, our Thanksgiving weekends started to look different. I think we spent Thanksgiving at her parents house, spent Friday up North (but we came home that evening) and then spent Saturday at my parents' house for a third round of Thanksgiving. It was still nonstop insanity.

"Have a restful Thanksgiving Break," read emails from people.

Then her side of the family decided to start hosting the Thanksgiving/Xmas mash-up on Friday, so instead of all of us driving up North, they all came down to us -- which was much nicer, but weird, because we discovered we weren't celebrating Thanksgiving on Thanksgiving Day. We celebrated it the Friday and Saturday after -- this was a conundrum.

What were we all going to do on the actual day? You can't not celebrate on the day, right?

So, we decided to have everyone at our house for Non-Thanksgiving Thanksgiving.

"You all can come to our house, but we're not having a typical Thanksgiving dinner," is what we said, since we were to have turkey and all the trimmings the next two days. 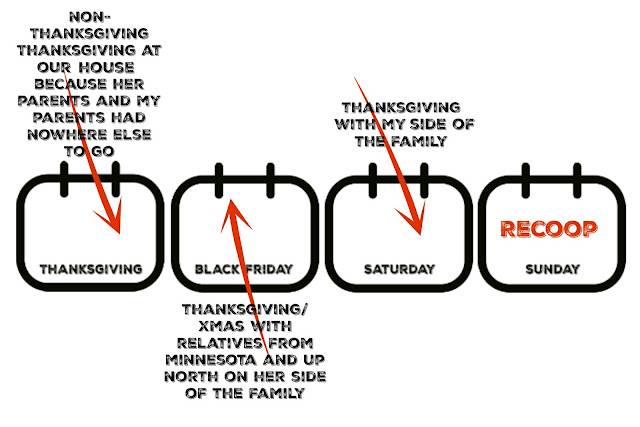 So, we had ham. And not just any ham, Paula Dean's Smithfield ham -- you know, the one that hit her in the face.

There were a few years where we squeezed all the people into our tiny little house. One year, we invited friends over, along with family, because they were celebrating on Black Friday, like ourselves. We had my aunt, uncle and cousins come down from Chicago, along with her side and my side of the family: my parents, her parents, her three siblings, one set of her grandparents, one set of my grandparents, my grandma, and the dogs.

The first year we had official Thanksgiving Thanksgiving, we brined our turkey. It was an Alton Brown recipe, and since he is our lord chef and savior, we gave it a go. And don't worry, we also had ham.


Not only did we say we weren't going to do Thanksgiving, we did it and then some.

I can't remember much of the brine, probably because I scrapped it from my memory. It's a process, brining, and we'll never do it again.

First, you thaw the turkey. Since it takes up an entire shelf of the refrigerator, this is a good time to get rid of all the old food that's been sitting on the second shelf, anyway. Then, the night before, you pull the turkey out of it's plastic, but do so carefully. All that thawing has unleashed salmonella juices that have oozed from the turkey. Balance the turkey over the sink, squeeze the juices out, and pat it dry.

The turkey has become a baby, and you have to also rinse it off. Make sure you have your bottle of Johnson & Johnson baby shampoo ready. Condition the skin, massage it, and place it into the large blue storage container, because unlike Ina Garten, the Barefoot Contessa, we don't have those fancy measuring containers that can fit a small goat.

It was so much work for so little impact. 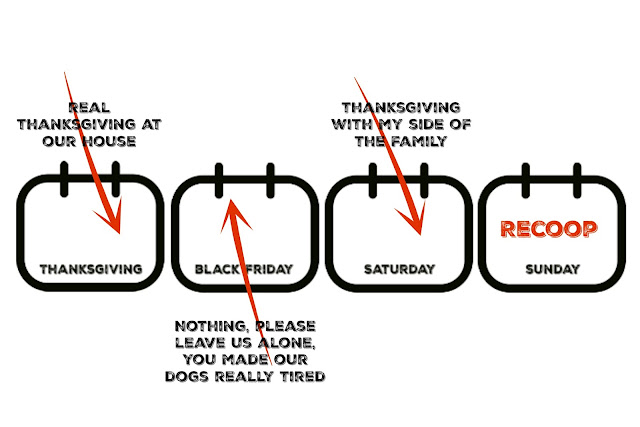 The next year, we needed to make sure it was easier.

Sometimes, regardless of how fancy you want to be, you've got to cook smarter, not harder.

The ham is a mainstay and deserves all the heat from the oven. The turkey is secondary at our Thanksgiving. We just buy two smaller turkey breasts, already seasoned, and cook them in the Crockpot.

You fry, we crock.

This year's Thanksgiving Thanksgiving was one of our smallest ones yet, featuring nine family members sitting comfortably around one table. Typically, we're split up between two.

And with the turkey and the green bean casserole in the Crockpots, the ham and butternut squash sharing the oven, the baked goods prepared the night before, and the potatoes brought by family, we've been able to find our food preparation groove.

You know you've made it to the big time when you actually have a system for Thanksgiving.