"The Stand" by Stephen King

My first experience with this book wasn't in written form: it was the four-night miniseries event that I watched when I was a seventh grader, you know, back when miniseries were...

Is that a thing anymore? Didn't Netflix, like, cancel that? Or was it DVR's fault?

Like, I felt drained and guilty after spending that much time in front of a TV.

So, 21 years later, it was about time I tackled this classic epic by my favorite author. One of his top three longest novels.

"The Stand" is just as relevant today as it was when it came out in 1978. With pandemics around every corner and political restlessness, this books seers a nice vision of hell right into the psyche. 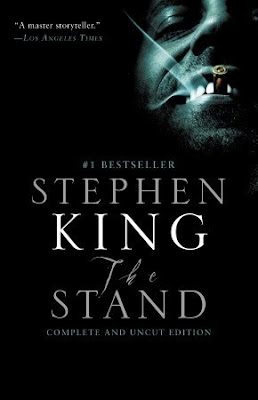 Except, it mostly takes place during the summer months, so as I was reading it, I was like, "ahh, summer."

And then a dried up body appeared in a car with flies all over it, and I was like, "never mind."

Everything and anything has already been said about this novel. Experts that aren't me have written all over walls about it, but since I write about every book I read, this one is no exception.

I often read King and wonder, "How is this horror, exactly?" Most of this tome is spent with characters who are stuck just trying to survive. It's not totally supernatural. Instead, it's a realistic approach to what someone might do if found within the belly of a catastrophe. Travel by motorcycle, keep camping gear, search for food, learn to hunt, etc. From the start of the book to the end, these characters grow, change, mature, live, and breath. Without writing a constant series where readers can return to the characters again and again, King does a phenomenal job of dropping a bucket down into his imagination and drawing up vats of character development for this 1,200 page book.

And sure, the supernatural is all fun and games, and the random chapters describing all the gross that's described because of the plague is all gruesome fun, but readers stay for the characters. They stay for the survivors who have chosen to be a part of the good, and they hope the characters who've chosen to be on the side of the bad will have a change of heart, and when they don't, it's not because they're evil -- it's because they feel they owe the Big Bad for saving their lives when they were found in ruin from the plague.

This book finds regular people hiking through life after the end of the world. Although these characters are pulled this way and that from their dreams touched with supernatural about which side they want to be on (good or evil), it all comes down to choice.