In search of minstrels

Are you going to this year's Song of the Commune?

Now that the world has gone and moved on, it doesn't mean we need to give up on festivals. In fact, our community of survival almost needs them more. Long before there was electricity, there were festivals. You may not like those people down the way, but you still need to rely on your neighbors as we learn our grit at the end of the world. We need to celebrate together.

I may not be able to play any instrument, but I can't sing in the car anymore -- we've run out of gas, or, at least, it's a commodity that we use only when we absolutely must.

And it's locked up. Cathy paid that price a few months ago when bandits went and took off with the last of her supply. 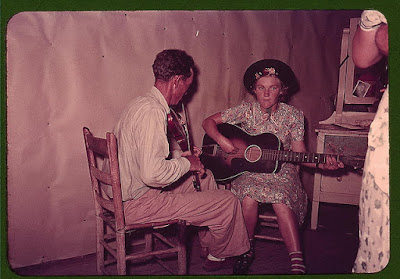 So, any guitar playing friend of mine will join me as I mark my premiere at the Song of the Commune. This year's bounty for the winner? Homemade canned items from this past summer's crops. The cost for this year's entry is a canned good each -- and winner takes all.

I mean, we're all canning these days, doing out best to make reserves for the winter, as usual, but we won't argue over a few extra.

I may not win, but it's worth entry. We have enough pickles, so what's one jar?

Last September, an old pop song was needed for the win. Something to take us back to the time from before, when a smudged face wasn't the norm. I can't remember words to songs for the life of me, but I may be able to handle the lyrics to a song I helped write.

Something hashed out on paper from my core.

That's this year's theme for the Song of the Commune: homemade. Anything goes. As I made my way downtown on my horse, I passed a few people working on something that sounded like hip hop. I never liked it before, but I slowed my horse as I heard them and their words. More like heeded. I finally understood, and for the first time, related.

My song may mourn in the form of bluegrass, with some fiddle and banjo, but their song hit rhythm and spat consonants. The fire of fear and the smolder of survival was a staccato with which we all could relate. And I applauded.

They tilted their heads up in response.

And I rode on.

If all the performances will be as good as that one, we will lose ourselves. At the end of the world, we need to right now.

But it's more than that. We need to tell the stories. We need to sing the survival. We need to protect ourselves from the anarchy, but we need to know what's going on elsewhere.

We may be able to write things down, but our history is becoming an oral one.

The Song of the Commune becomes our new social studies textbook.

Labels: Blogposts the Summer Fantastic notes at the end of the world