"The Marvelous Land of Oz" by L. Frank Baum

Boy did I choose the right time to read this book this summer. With transgender studies heavy in the media this season from the reveal of Caitlyn Jenner, I didn't realize that L. Frank Baum was so ahead of his time in 1904. 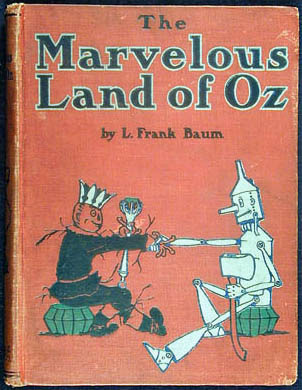 To become familiar with the various Oz books, I've done my middle school reader analysis by looking at all the covers and titles of the Oz books. I've learned the different titles and characters involved in each, and the name that has always returned to my Oz vernacular is the character Ozma, the princess of Oz.

I just had no clue that she was a he in the "Marvelous Land of Oz."

Seriously. Just when I thought "The Wonderful Wizard of Oz" was a child's fever dream, Baum throws us another curve ball.

That curve ball is Tip, a boy that's trying to run away from some old witch that owns him.

And he has no idea that he's actually Ozma.

Transgender studies and slavery? Where are the academic literature papers?

The witch's name is Mombi, and she is far worse than the Wicked Witch of the West. You have to remember, the WWoW had just one eye in the "Wonderful Wizard of Oz" and was barely even in that book. Sure, she had a hat that controlled the flying monkeys, but that was about it.

Mombi? She had spells and magic and evil all up in her sleeves just waiting to curse and destroy. I'm assuming a former lover had left her, and she just never recovered (maybe that former lover was the infamous Wizard?).

There ain't going to be no prequel musical about Mombi, folks.

Sadly, no house or otherworldly presence demolishes Mombi. Instead, she goes off to meet up with some accomplished magician to purchase some new spells. Or steal them. Or date said magician. In the end notes, it did mention how she used the Tinder app on her phone.

This leaves Tip alone to build a man out of wood with a pumpkin head to scare Mombi when she returns from her rendezvous with her boy toy the accomplished magician. The dummy frightens her for a moment, but she decides she'll just kill Tip.

Talk about a short fuse.

But she's dumb. She actually tells Tip that she's going to do away with him, but she'll just wait until the morning. Her back hurt, or something. This gives him ample time to escape, steal some magic powder, make the pumpkin dummy come to life, make a saw horse come to life, and here I am just giving you a play-by-play.

The "Marvelous Land of Oz" is easier to swallow than the first. Familiar characters like the Tinman, the Scarecrow, and Glinda all play important roles in the book. Although Tip escaping starts the book off, we find the true plot to be the Scarecrow reclaiming his throne to the Emerald City (yup, he's king) from a bunch of bratty girls who overtook the city with knitting needles.

More inanimate objects come to life with the help of that powder, and the motley crew scurries to Glinda and asks for help in reclaiming the throne. By the end of the book, we realize the bratty girl that took over the Emerald City nor the Scarecrow are the rightful owners of the thrown.

It belongs to a girl named Ozma.

She disappeared eons ago, and no one has ever found her. It was one of the most popular episodes of "Unsolved Mysteries."

Narrated by Robert Stack, we learn that the "wonderful wizard" had Mombi get rid of Ozma.

Mombi does have some kind of heart because instead of killing Ozma, she just turned her into a boy named Tip. While Mombi is trapped by Glinda, she is forced to transform Tip back into Ozma.

And with that, the rightful ruler of Oz has now retained her throne. She was simply a he.

We'll see what happens in the third installment, "The Mean Girls of Oz," when Dorothy and Ozma, the two most popular girls of Oz, finally meet.