It leaches, Part One

eople with anxiety fixate. Usually, there's some blob in their life they will choose to focus on, and even if it's not really stressful, they will use up all of their being to focus on said blob. All the synapses in their brains hem and haw over it, pulling this way and that. It becomes the only thing they can think about, and it leaches.

Just recently I got to experience the fixation of worry over my Volkswagen Beetle (again). Any normal person may have just been annoyed with the dealings of a car, but not me.

I fixated. And shut down. Concentrating at work became almost impossible. When I found myself easing into the day and not worrying, I would stiffen up, and realize I wasn't thinking about the thing and begin thinking about only the thing!

You would assume that I would be over the moon about driving a Beetle, and most of the time, I am. Three years ago, however, the Beetle's 'check engine' light lit up and like any normal car owner, I took it to our mechanic.  He said to do away with the car -- shun! Be gone, you!

"Once you fix what's wrong, it'll be a domino effect," he said. Who knows what would happen next if we fixed the engine, but it couldn't be good.

But, instead of trading it in and getting money, I let sit at my in-laws for a while, and then at my parents for the rest of the time.

The Beetle is/was my dream car. When they came back into production back in 1998, I knew I wanted one as a junior in high school and hoped they would remain popular so I could eventually buy one.

I made a rash decision when I became an official adult with a job to buy one off the lot -- well, not quite off the lot because the one I wanted needed to be shipped in. So, off someone else's lot.

I didn't think about long-term expenses.

The car has gone through much in our tenure together -- the biggest was the truck tire (we had no choice, it was right in the middle of the highway, and we were surrounded by traffic) we ran over. 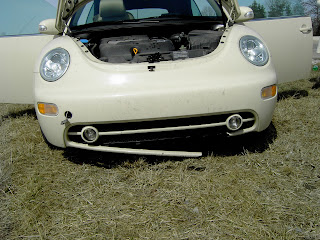 That tire ripped apart the Beetle. We were lucky we didn't die in traffic. I steered the car off a close-by ramp:  the brakes were shot, the steering, locked, and we rolled through the grass, which slowed us down. We got out to assess the damage: flat tires, the front of the car was lop-sided, purple liquid sprayed all over the sides of the car, etc. The truck tire murdered my Beetle.

It was totaled, but, our insurance company didn't think so. It was still too new, so instead of paying off the car and getting rid of it, they had it repaired. 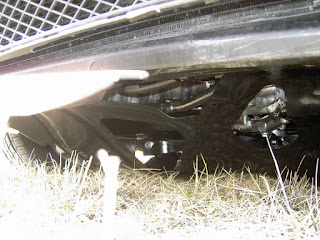 And my best friends worst enemies at Tom Wood Volkswagen were the ones that got to repair it.

I was without that car for a long time. Three weeks? 64 months? Who can remember the time frame. What I do remember is the giant asterisk floating next to the car when I finally went to pick it up. 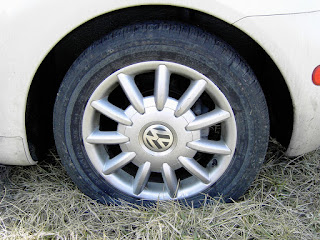 *I will never be the same again. Your insurance company should've just considered me totaled and called it a day. Instead, I'm going to cause you all kinds of trouble. You and me? We're going to be friends. Best friends.

It looked at me like the crazy roommate from a dorm room horror movies.

When I drove it home the first time, it started to shake when I reached anything over 50 mph. This was not normal, so I took at it back to Tom Wood the Devil. The next day, he told me it was a bent wheel -- so insurance covered a new wheel and tire.

I picked it up again, and as I hit 50 mph on my way home, guess what happened?

That's right! It was still shaking.

I took it back again, and they the Devil found a small crack in the suspension somewhere. Once that was fixed, I got to go back and pick up the car again. This time, the steering wheel wasn't centered. It was cock-eyed. Instead of saying anything, I was over it. I drove it home.

A few days later, a light on the dash board came on.

I took it back and told them the steering wheel wasn't right.

They had the car for a week after I spoke to them. At some point in all of this, I was sitting with one of the customer service reps Imps -- you know the kind, they only where golf polo shirts, pleated khakis, where white sneakers, and deal with customers like we're all idiots.

I tapped the desk gently as an eerie calm swept over me. "I am tired of playing these games," I hissed, my voice low. "You will take care of this, and I will get a rental car from you."

Or something like that. The room shifted. There was a moment of frost in the air. My pupils dilated, eclipsing my irises.

And yes, it was all finally taken care of after four completely different trips to Tom Wood.

When I picked up the Beetle, sitting in the back seat was a giant slab of anxiety, buckled in, ready for a ride. After all of that utter nonsense, dealing with Tom Wood became synonymous with anxiety. Driving into the lot was enough to bring out a panic attack.

And since it was a brand new car, I had to deal with the warranty. I was afraid to have any other mechanic touch the car in fear I would void the warranty. Tom Wood did every oil change for almost five years, and I swear, practically every time I went in for the oil change (after the truck tire accident), they would come get me while I sat in the lounge and tell me about more problems the Beetle had.

It was never just an oil change.

Then: "Oh, and we also just found out that your car has a tumor. It's benign, but it needs to be removed."

I tell you this prequel because, as much as I loved the Beetle, it has always come with its share of worry and frustration.

This is probably why the car sat for almost three years. Years of anxiety from Tom Wood created a nasty residue in my dealings with the car. Get rid of the car? I would just rather not deal with it.

And so it sat.

I did not remain car-less, however. I inherited my grandfather's Ford Taurus station wagon. It was a band-aid. It got the job done, and so the Beetle was "out of sight, out of mind." Until this past spring and summer. The Taurus began to give me some trouble. To my chagrin, the engine was throwing oil on the alternator.

He suggested a better drive-able car before the 2015-2016 school year. Since we still had the Beetle in our lives, we decided a good option was to see if we could go ahead and fix it. It had to cost less than buying a used car. Had to.

As a teacher, I had all summer to deal with the Beetle and get it fixed.

I waited until my last week of summer.

If that doesn't say "procrastination," I don't know what does. It's the journalist in me. I work better under pressure with a fierce deadline.

Since I had the entire summer, I ignored it for a few weeks, and then, when I knew I couldn't ignore it any longer, it leached onto me. With nothing more to worry about, my anxiety began to creep in and take over. This project, fixing my car, became a cavernous mouth that yawned before me. If I dared enter, I would not come back out.

To deal with the car meant one thing: the unknown.

In my dreams, a Tom Wood worker would come out of the corn fields, stop me, and tell me the ball bearings needed to be replaced. In another dream, as I was buying milk, the head of a Tom Wood worker was in the cooler, and oil was coming out of his mouth. He spat black spittle my way, warning me, "The car will never be fixed! There will always be something else. Always."

Any normal person would've just called a tow truck to take it to a shop to see what really was wrong with it. Not I.

I wanted to wait.

And in doing so, it turned into anxiety. I had every right to feel that way, though, because getting the car repaired and drive-able also came with it's fair share of trauma.

Something inside me must've known. Two weeks later would find me curled up in the fetal position, feeling the same way I did about dealing with Tom Wood.