I need to tell you about food right now.

I was going to write this long post on Facebook about my past two nights of dinner for all my foodie friends out there, but I was afraid it was going to be too pretentious.

Like, "I only eat free-range chickens that have been fed organic microgreens."

So, instead, I'm going to be pretentious on my website. Not too pretentious, though. I don't want to lose friends and alienate people. I'll leave that to Facebook right now.

It's doing such a nice job.

There's a gigantic push to eat and buy local, lately. It's super-trendy to run screaming from Walmart and run cheering to a local farm stand, instead. I've been a part of this trend for a little while now. I still go shopping at Aldi and Meijer, but whatever the local farm gives us for the week is used to plan out or dinners.

If they give us a giant head of cabbage, we shred it and put it on shrimp tacos, or I use the whole thing to make from-scratch coleslaw.

Our farm of choice is Tuttle's Orchard. It's so much more than just apples, regardless of the word "orchard" in its name. It's in the next county, and although it takes about 25 minutes to get there, I go each week with a song in my heart to pick up a tote full of locally grown fruits and vegetables, and if they aren't local, they're from a Tuttles-approved farm in a neighboring state. Or a not-so-neighboring state.

"Where exactly is this orange from?" I could ask, holding it up like it's a murder suspect.

I'm happy to know exactly where my food is coming from.

Now, here's where I'm going to start getting all pretentious and hipster-like.

Because of the farm we go to, we've also introduced ourselves to some local meats and honey and pies they sell in the store. It's getting to the point where some of our dinners are about 80% local. My goal is to become 100% because there's a certificate involved.

Now, the past two meals have not been fancy, mind you. The menu consisted of BLT's and barbecue. 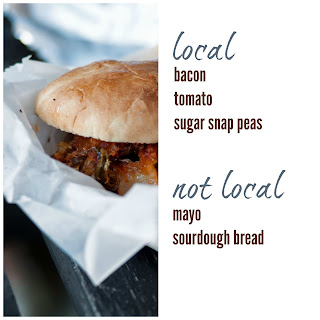 For the BLT, let's start with the bacon. I will never buy processed bacon from the regular grocery ever again. We call it fatty-fatty bacon, and the taste of it is buttery, porky, and complete insanity. The tomato, although not from Tuttles, came from a Tuttle-approved farm in Tennessee. It's flavor was also filled with complete insanity.

Like, ohmigawd, this is what a tomato tastes like! Everything else up until this point has merely been Play-doh!

Sadly, it was the only tomato we received in last week's tote, The skin was tender, at the peak of its ripeness, and as I sliced through, the enviable deep red of a Crayola crayon went all the way through.

Yeah, so the sourdough bread and the mayo were from Aldi's -- nothing fancy. Shh. Don't tell anyone. (Kidding. I live and die by Aldi's -- it owns Trader Joe's. Literally.)

But the sugar snap peas were from Tuttles, and we sauted them up in butter and salt.

For the BLTs, I realized we could go 100% local/homemade: I would love to make my own mayo, and a friend of mine makes a killer loaf of bread. The only reason I would do this is because it's a personal challenge, it is not necessarily something I strive to do.

Our barbecue dinner would be a little tougher to go 100% homemade, since I'm not sure hot to bake brioche buns.

Tuttles has a freezer section with many local meats to choose from. There's ground beef, bacon, bison, pork, chicken, and sausage. They also have pre-made shredded pork barbecue. 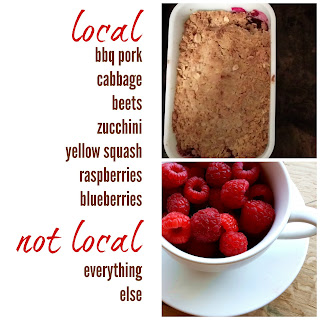 We put the barbecue on two open-faced brioche buns (that we got from Aldi). On top of the barbecue, I scooped a small mound of scratch-made coleslaw (this rendition had local cabbage and beets). I will never buy jar coleslaw sauce again. Ever. It is now a mortal sin. I touched a jar the other day, and my fingers burned. Since you can't just have a sandwich by itself as a full meal, I roasted up squash and zucchini (grown at Tuttles).

The barbecue was lucky to be followed by a dessert. We picked blueberries last week in Virginia and brought them all back with us. Those need to be used, before they go bad, and we also have raspberry bushes in the backyard. So, although the crumble I made to go on top isn't necessarily the healthiest (with its butter-and-brown-sugar-goodness), the berries are "superfruits." I think it's safe to say that all those balance each other out to the point where I didn't even eat dessert. It's the same philosophy when you eat off of someone's plate, those calories don't count.

Not every meal is that ridiculous when it comes to local fair, but I feel a small sense of pride shopping at a small local farm. The best part is, they recognize us now, we go so often. Let's just hope they're not getting sick of us.