"Fables" has been a part of my life for the past five summers. In a sense, it has been an on-going summer series. Even though they're available at any time of the year, it seems fitting to sit down and read them when I'm out of school. 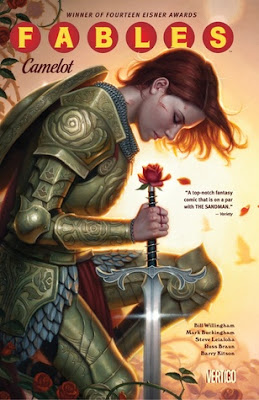 I will not pen some penultimate review where I navel gaze about the brilliance of the stories and the immense withdrawal I will go through now that it's out of my life -- that will happen after I read the last two.

As per usual, it's difficult to write a review for a series, knowing some sad and lonely individual will actually trudge through this review having never heard of "Fables" before. I ain't about to sum up 20 volumes of a graphic novel (OK, fine, comic) series.

We last left our beloved Fables in a disheartened mess. Bigby was turned to crystal, shattered, and distributed to the winds. Snow White and Bigby's daughter shows up as an adult, telling the rest of the family that one of their own had died saving her. Red, Snow's sister, finally makes an appearance again. And the formerly fat Mrs Pratt, now gorgeous and svelte from Mr. Dark's magic, takes her turn being a Big Bad -- or, so it seems.

"Camelot" plays on the tropes of our beloved story. Everyone is well aware of the tragedy the befell Guinevere and Sir Lancelot -- and let's not forget about poor King Arthur's heart. As Red decides she needs to recreate the Round Table and locate new knights to claim her honor as the Paladin of Hope, all the pieces begin to fall into place that, although this is a new Round Table with a very new attempt at giving different people Second Changes, the cards will be played the same way.

It's just, that, well, it's a bit of role reversal -- since Red's a lady and all, but she's also filling in as the new King Arthur.

Which means, she will be facing a new Lancelot.

And we can already guess who will fill that role, because seriously, what other female character is strong enough in the "Fables" series to be the Lancelot to Red's Arthur. It's also a way to run the story arcs full-circle, since Red and her sister, Snow White, didn't really get along in the beginning.

One of my favorite chapters in the book found Bigby wandering through a different land (is it heaven? Do we find ourselves in another life when we die?) talking to Boy Blue.

There is much build up, but we must wait until volume 21 to see where it takes us.

What I do know is that Issue 150 is the final issue, which will be published this July, leaving me with two more issues to read.