"The Magician's Land" by Lev Grossman

This is the final installment of a series that took the fantasy genre for a joy ride.

I have yet to sit down with any high fantasy novel, but I get the idea that Lev Grossman's trilogy's goal wasn't to be high fantasy, but to deconstruct it by using the familiar trope of Narnia. 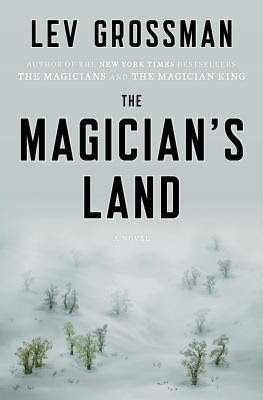 We all know Narnia, right? Ordinary kids are special because they are whisked away to a fantasy land that is held together by the lion Aslan. Different kids. Different adventures. Always the same cryptic lion. Lots of religious allusion.

Grossman uses the Narnia idea, removes the religion, and asks the question "Why isn't this land perfect?"

Even a fantasy land has it's demons. And those demons can haunt.

All three of these books are character driven told mainly through the point of view of Quentin Coldwater, a 30-year-old magician by the time we enter book three. The story finds our anti-hero kicked out of Fillory (the Narnia of this book) and looking for a place to belong. Compared to the other novels where he is restless, listless and whiny, he is finally getting comfortable with his lot in life.

And even though he's not quite sure what that is yet, he's not crying about it.

After all the things have happened to him, all the negative, and mostly, self-induced pain, he has grown up and instead of being the most unlikeable character (like he was in the first and second books), he starts to walk through his life with a wisdom he so lacked.

And the reader actually enjoys being in his head, for once. It's like, "You're finally getting it, Quentin. Thank you."

He returns to Brakebills (the college of magic where he started his journey) to begin teaching. He finds out that his true magic ability is to repair things, which seems super lackluster (until the very end of the series when it is the perfect ability). He teaches. He studies a page out of a book he has from the Neitherlands. He isn't too mopey, and he decides he's quite happy at the school, regardless of how slow it seems.

He doesn't consider himself the most powerful magician, but throughout the book, he's still pretty impressive. Maybe not the best, but pretty close.

Then we meet Plum, a girl who is related to the Chatwins (the last name belongs to the kids that went to Fillory). She has run from the story of Fillory all her life because she sees how it has destroyed her lineage. She doesn't realize that one of her teachers, Mr. Coldwater, has actually been there. Their paths finally become intertwined one night when Quentin has to save her from a magical prank gone awry. Both of them are kicked out of Brakebills, both come face-to-face with Quentin's dead girlfriend, Alice, who is a so-called niffin (or magical-being-demon-type-thing, which you should know about if you read the first book, so please don't ask me to clarify), and both were contracted to be a part of a journey to reclaim some magical items.

During the first half of the book, the characters are hired by a magic bird to search out a suitcase that belonged to Rupert Chatwin, one of the kids who journeyed through Fillory. The search goes awry, but the suitcase is found. As well as a journal with a testament written by Rupert, explaining secrets about Fillory that become helpful later in the book. Plum realizes she can't run away from her past anymore and completely embraces this place called Fillory, and with a new plan, she and Quentin set out to work some very serious magic.

Parts to why the title "The Magician's Land" as a title makes sense.

In the meantime, told through other chapters, we find out through Janet and Eliot, the High Queen and High King, that Fillory is dying. And they mean to save it.

Some of the best chapters are with Janet and Eliot, two hipster, jaded characters that love their magic, love their Fillory, but don't talk like characters all stilted from a George R. R. Martin book. They make jokes, show off, speak in modern lingo, all while riding hippogryphs and winged horses and the like. And they throw zingers at each other that are hysterical -- and weirdly out of place, while they talk to a giant snapping turtle, fly in the air, produce axes out of thin-air, etc.

Meanwhile, Quentin and Plum, using a spell from Rupert's journal, study and prepare to create their own land -- and when they do, only to realize it's a sad mirror of the house they are staying in, Quentin also realizes he has somehow brought Alice, the blue, scary niffin with.

Why isn't she killing Quentin? We soon find out.

Quentin, Eliot, Janet and the lives of everyone from the first two books intersect in a grand finale that showcases the growth of all the characters, the completed journey, and an ending that is actually quite happy -- something you really want the characters to have because their train ride through the series was absolute hell.

Grossman's prose is accessible, making it a good series to tiptoe into the fantasy genre. On a deeper level, though, you can see Grossman picking apart the genre, and if you want to be more cerebral about it, there are such discussions to be had.

I get where he is coming from, stylistically, but I also enjoyed the story, the writing, and the fleshed-out characters.

We live in a day-and-age when finales are shoved under microscopes. An author or creator has to get it just right, or he will be crucified by his audience.

This time, I think the author succeeded.
Labels: book review