It's stubborn, but you shouldn't be

am supposedly part of something that affects 12% of Americans.

Sadly, I am lucky to be a part of the 4% that actually seeks help.

Out of 40 million Americans that truly suffer from this strange mental disorder, only 1.6 million actually seek help. Obviously, you can't fit 1.6 million people in an elevator. It's difficult to picture, but you can definitely fit all those people who are coping with anxiety in the state of Rhode Island.

The rest of them are at the grocery having a melt down, wondering why they feel the need to drop everything and run.

I believe many of the untreated are men. I know the studies are out there, and I know some of it can be found within the military community, but I am struggling with finding any scholarly work that will help me make some kind of point.

That point? Whatever it is that men typically do to ward off the stigma of anxiety, those that ignore and swear they don't have a problem, need to fess up. We've only got one life, gentleman, so why live in some state of mental anguish?

I mean, as fun as it is to feel like the world is going to end, there's a better way to see life than gut-wrenching doom and a limited vision of happiness.

It was my junior year when I was baptised in the river of anxiety. It came on more like a tsunami -- this massive wave of hysteria that collapsed all over my September, pulling me out to sea with it. How could anyone feel so horrible for no reason? 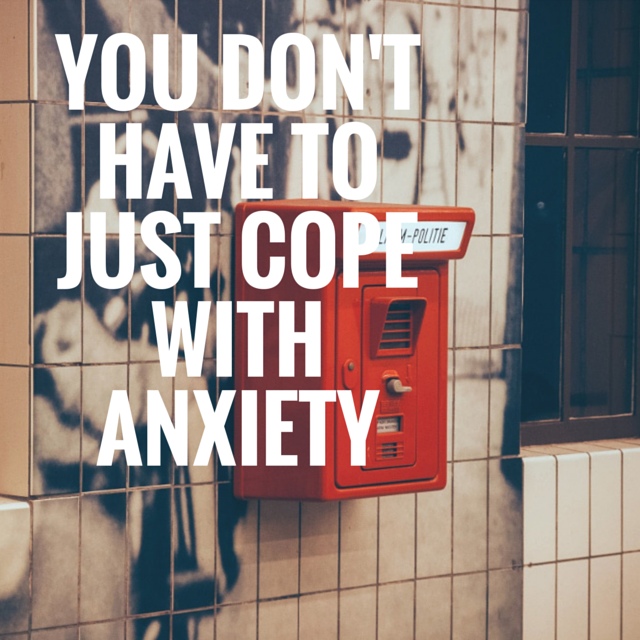 These were a mystery to me. To my knowledge, I was not in the woods, alone and naked, without a scrap to eat. My heart raced. I could feel the dread from my head to my toes (like a catchy pop song, but worse). My vision darkened on the edges like a bad photo filter. Luckily, within minutes, it passed.

After a few panic attacks, my body reacted the same way a toddler does after his tantrum doesn't work: it took it down an octave. It still tried, but it wasn't nearly as invested. Those were the anxiety attacks. They weren't quite the din a panic attacks were, but they definitely stomped their feet and shook the walls. They came. They went. My body was exhausted afterwards, like I had just spent an hour in the gym.

"What was I freaking out about again? I can't remember."

Once the bravado of the attacks wore off, my body took in anxiety like a parasite. Whereas the attacks were strong and in my face, plain old anxiety was that annoying neighbor that won't stop talking. For hours.

Anxiety is limp. It's a benign tumor that grows large and just gets in the way. It's bulky. It's there. You breath heavier. You take slower steps. Everything takes effort, but you're not completely without feeling like depression. You laugh here and there, but you have an instant knee-jerk reaction that you're going to die and the world is going to end, but it's OK, right?

This is just how we feel now, isn't it?

No. It's not. If that's how untreated men (and women) are going about their days, succumbing and just giving into anxiety, no wonder it's still not a part of the mainstream conversation.

Yes, anxiety can make you feel weak and afraid, but there's an inner strength that surges behind it. A person with anxiety may fear life for whatever reason, but they keep going, and every once in a while, there's pep in that person's step.

With anxiety, it's so hard to tell because it's so easy to mask.

It's a juxtaposition: while having anxiety makes one feel weak, just putting up with it is a sign of strength.

This conversation can't happen alone. Mental health needs to be brought to the forefront of insurance agencies to help people get treatment. The drinking, the pills, the overeating that ails Americans and makes insurance companies fork out the money could be a nasty band-aid to a deeper problem. Once we attack some of that mental illness, Americans lives might physically become better.

The mind and the body are one.

It's time insurance agencies acknowledged this.

But it's also important for the gentleman (and women) who have ignored it for too long to also acknowledge this. To do so is not weak. That stubborn thought process is a lie.