Nothing has thrilled me these past few summers as much as the Fables series. I knew about this series years before I picked it up -- a friend, while living in Oregon -- could do nothing but talk about it. "Yes. I get it. You love it. It's a comic," I thought.

Then, I saw that my library actually carried it and my. World. Was. Changed. 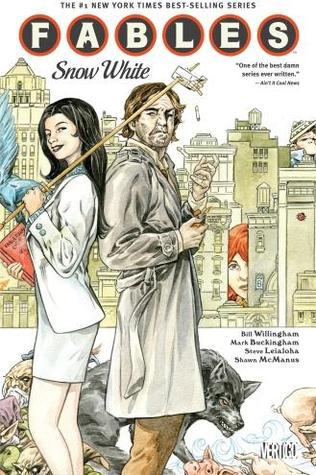 I won't ever be able to hate-on the "Fables" series because I have fallen in love with all of it. All the good. All the bad. When you invest your time with a series like this one, it's a marriage. You are with it for better or for worse.

It's not that "Snow White" was "Fables" at its worse, but I understand why the writers/creators are dwindling down the story and putting our beloved "Fables" to bed. This was not one of the strongest story arcs, and it felt a bit contrived, with the main baddie already inside Castle-Dark-gone-Fabletown. Could Mr. Dark have hired him, knowing his connection with Snow White? Possibly. Was it a weak storyline to show that Snow White was already married?

This former husband should've shown up earlier in the stories if it were to work. What these issues did, though, was kill off one of the most beloved characters -- and the man in question did it. Here's my issue with killing off main characters that are integral to a series -- that character needs to be killed off by either something way out of his control (like a disease that's been brewing/major accident that makes sense) or it needs to happen in the hands of an equal, another character that's been around for just as long or is just as powerful.

Now, I'm not up-to-date with "Fables" so the main character that died could, possibly, be brought back.

But until I see that, I stand behind my Dumbledore/Snape Ideal of Killing Off Main Characters.
Labels: book review