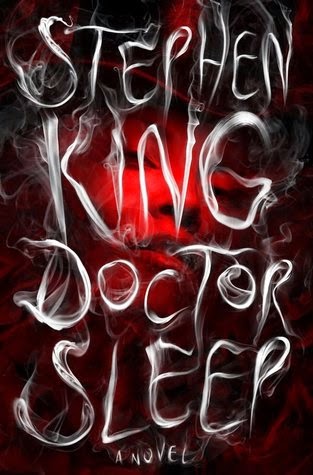 It was years ago when I read on Stephen King's website that he was playing around with two novel ideas that had him revisiting two previous books. The first one was a story that threw the reader back into Mid-World and "The Dark Tower" series (which I read last summer).

The other one was this one, here: the sequel to "The Shining."

Now, "The Shining" has two camps: the Book People and the Movie People. So, when I told people I was reading a sequel to "The Shining," they just looked at me and say how terrifying the movie was.

I usually want to hit them. I'm a part of the Book People subgroup called "The Purists." You can love on Stanley Kubrick all you want -- I just don't get his movie-making, and I don't really like movie version all that much. Usually the people that freak their freak about my unliking of that movie have never read the book. And just like anyone who is a book-versus-movie purist, Kubrick didn't just leave out parts of the book, he turned the whole story on its head.

So, if you're part of the Movie People, you need to step away, because you're probably thinking, "How could there be a sequel?"

Easy. Daniel Torrence might've gotten away from the Overlook in once piece, but part of that destroyed hotel stayed with him.

As an adult, Dan is just as much an alcoholic as his father. He also hits a real low in the beginning of the book that pushes him to finally reconsider his life. In doing so, he gains some friends, as well as support through Alcoholics Anonymous, as he finally begins to live his life in the town of Frazier in New Hampshire. He starts to work at a hospice where he uses his Shining abilities to help the dying go in peace. He earns the nickname "Doctor Sleep" because the people who work there knows he can do something, just what, they aren't sure.

In the mean time, we also learn about the True Knot, a group of quasi-human weirdos that live in RV camps, own property throughout the United States, and go after children who have the Shining, like Dan. They kill the kids, sucking out their essence (known as steam) and this provides them much longer lives. They are true soul suckers, and the reader never finds out how old they really are.

Since they look like middle-aged cronies constantly vacationing, they can slip under the radar of being suspicious.

As we jump between different points of view, we also learn about a baby girl (who eventually grows to be a seventh grader in the book) named Abra. Abra is special because she also has the Shining, but she can do things with it that Dan never could.

The True Knot eventually find out about Abra (because Abra learns about a boy the True Knot murders), and they realize the power she could give them. Dan and Abra become friends, and allies, as they realize how un-safe Abra is with the True Knot traveling around. With a few additional friends on the sidelines, the book moves like a train.

Although the book isn't exactly terrifying (I don't scare easily when I read), it was phenomenal to have King return to some spooky roots, playing around with the supernatural. I'm a monster fan of everything he writes, but I have immensely loved everything he has written since "Cell." And own it. I've run out of room on my bookshelf.

"Doctor Sleep" is a satisfying sequel, and King does it justice. It's not hokey, it's well-written, and King's voices for Dan and Abra are so authentic, you can't help but fall in love with them.