"The Wind Through the Keyhole" by Stephen King 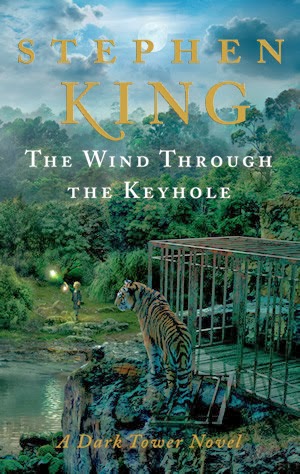 Stephen King is a writer, for me, that can do no wrong. He is prolific. He has created his own world through "The Dark Tower" novels that connect to other novels he has written, making it seem like each book is a part of a larger master stroke.

This could be an accident he stumbled upon and ran with, turning happenstance into something that is now planned, or it's a vision that's so panoramic, it's on the verge of 360.

He is a modern genius.

"The Dark Tower" series has been finished for a while now, and the way King ended it...yeah, it's done. There will be no sequels. But there's so much space in between all the books that it could be easy for him to continue adding to his series. That's sort of  what he did with "The Wind Through the Keyhole."

I say kind of because it's not necessarily a stand-alone piece...it helps to have read the first four books out of the seven, but it takes you back to this world King has created, and he seems to continue laying on the mystique, making it a richer place. For it's 300 pages, it was nice to see this world in it's prime. It's rich and colorful and filled with vegetation, unlike the original books where it's dead, dried up, and "moved on."

This novel's purpose, I don't think, was to advance the plot. King did that in the seven books he wrote originally. I think this novel was more for King, himself, than it was for us. But, since he's such a nice guy, he wanted to share.

He does this little trick, however, that's reminiscent of "Inception." We start out with the main characters that we know and love. Then, the mainest of the main characters, Roland, tells the others a story that relates to his childhood. Then, while he's a young man, he is protecting a little boy and Young Roland tells the little boy a story, which takes up most of the book.

I don't know if that made much sense, but reading it will.

King also creates a scary weather phenomenon that I hope never comes to life: the Starkblast. It's first warm for a few days, feeling like summer is about to come, when the coldest of winds and air tears through the land, freezing things so fast they snap.