I wish I picked up another gallon of milk while at the store a week ago. We really are running out, and that never happens. Maybe all those grocery-shopping crazies had the right idea -- stock up.

"Oh, we'll be stuck for a couple of days," was my thinking. I didn't anticipate schools to close four days in a row. Maybe a fifth? Come five o'clock, I'll be waiting by Twitter. Not the phone, not my email, but Twitter. Here's why:

Most teenagers have a Twitter account, and since Twitter is public, you can also search it, much like Google. With this in mind, I searched my school district's Twitter handle, hit refresh a couple of times, and sat back, enjoying the crazy posts from the students.

I'm going to get all old-man on you right now. Back when I was a kid, I didn't walk uphill both ways to school, barefoot like my grandparents, but I did have to wait by the telephone to find out if school would be cancelled. I also sat in front of my TV, not a flat screen, thank you, and waited for my school name to scroll along the bottom. We didn't get automated phone calls. We didn't get text messages. We just wasted our time in front of the TV in dire anticipation, hoping we could sleep in.

The waiting hasn't changed. Modern teenagers still succumb to that. What has changed is the ability to communicate to the school district directly, begging for a snow day. By typing in the schools Twitter handle, they can beg directly.

What unfolds is a bunch of students pleading with the school district that another snow day is, indeed, needed, while showcasing exactly why the students need to come back to school. The days off are nice, but you can tell they're getting bored.

But they are creative, especially when it comes to "showing" why school needs to be cancelled again. 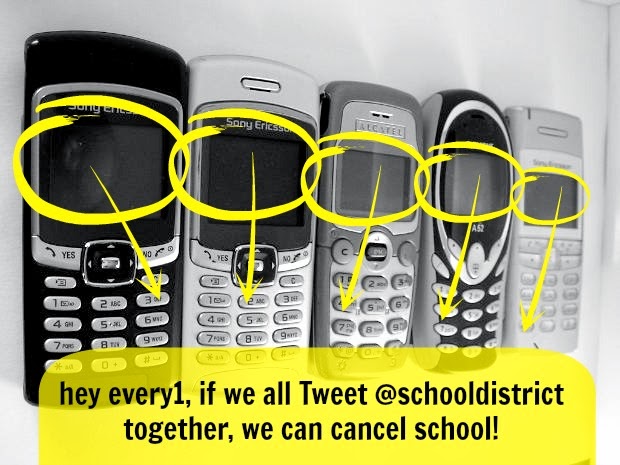 Some of my favorite pictures have been students exclaiming how icy the conditions are by posting pictures of friends having "fallen" on the sidewalk. One picture posted, the girl had no shoes on. Some students just post pictures of the icy neighborhood and city streets, which is pretty legit. A few have posted pictures of their bus stops, which are heaping with mounds of white, fluffy snow. They stand atop it, proclaiming, "Where am I supposed to wait for the bus!?"

One boy took a selfie, while laying on the ground, with fake blood on his arm.

My favorite, I'm not sure why, were the pictures one student Tweeted the school district. There was no pleading, just random horse pictures. No, "This is what I look like while I wait for the decision." Nope. The girl kept Tweeting weird horse photos, directly to the school district's Twitter feed. The horses eyes were bulging, or the horse was in mid-ney, showing pink gums and large teeth.

I doubt any of it worked. but the students must think they are actually swaying the decision of the superintendent. If he even looks at or has access to the Twitter account.

So, as the "warm-up" continues today, I will be back on my laptop at 5 p.m. to watch Twitter explode with student desperation, both in words and photos, begging for the last day of the school week to be cancelled.
Labels: snow snow storm weather