Back Injuries Make Me Faint

During the fourth grade, when growth spurts (mainly for the girls) began to erupt and heights of students began to teeter across the line to the bathroom, we were asked to sit down on the floor in a darkened classroom. The TV/VCR unit was wheeled in. The teacher-in-charge stuck in the video cassette, and we all had to sit and watch.

On the screen, a man in a white coat presented himself.

“We are going to learn about scoliosis,” the fake doctor said. “It’s a disease of the back that makes your spine bend in ways that make it impossible for you to live a happy life."

We all shifted on the floor. This was going to be uncomfortable. 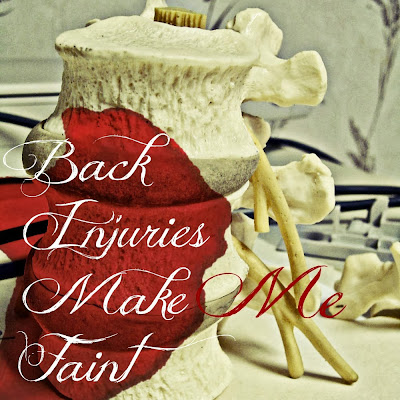 "The surgery to correct it is painful," the fake doctor continued to say. "Death would be a more viable option, but that's beside the point, right? Right!" The doctor swayed back-and-forth on his heels with his hands in his white coat pockets. "Anywhoo, since you’re pre-teens hitting that time in your life where your body is changing, you will soon begin growing at rates your parents can't keep up with."

The “I’m not a real doctor, but I play one on TV” stood there and beckoned his first example.

In walked a girl in a blue one-piece bathing suit, and she was asked to touch her toes. She did so, gracefully, and…nothing. She looked like a normal person bending over. She was sent away. The next example was beckoned forward, and in walked another girl in a similar blue bathing suit.

“ over you disgusting mess,” the doctor commanded her, pointing to the floor. She did. What emerged from her back changed my world -- for the worst.

She had transformed into a camel.

I felt the essence of life begin to pull away from me. The TV screen started to grow dim. The floor fell away. A teacher in the room saw this and asked if I was OK. I can't remember responding.

And then they showed the brace a person wore while trying to correct scoliosis.

Once the video was finished, my class was informed that we were all going to hit our growth spurts soon, and if we didn't grow straight, we would grow crooked like that girl, and there would be a bend in the spine.

That bend is called scoliosis.

"Since surgery is painful," she didn't really say but should've, "you'll just want to die."

I went home that night and cried.

“I don't want to grow crooked!”

Worry consumed me. Didn't you grow while you slept? How was I not going to grow cock-eyed? I slept in strange positions. I would wake up with my arms wrapped around me, making my contortionist uncle jealous.

Just kidding -- I don't have a contortionist uncle.

I knew I was going to get it. Scoliosis was mine to have. It was the gift my body was going to give me, wrapped up in strange sleeping positions.

The trauma was two-fold. Yes, the girl that morphed into a camel on the TV screen was a bit too Discovery Health for my taste at that young age, but we were also going to be checked for camel humps.

We had to walk down to the nurses office, one by one, take off our shirts and bend over. She watched the spinal chord pop out of our flesh, while setting a level on it. If that little bubble was off, we had scoliosis.

We had to succumb to scoliosis checks a couple of times. I don't remember the results or if anything was said, I just remember the room being really cold and how much I hated taking my shirt off in public.

After all that , the true worry of scoliosis never afflicted me, like actually getting it. Instead, once I was in my early twenties, I decided to bend my spine on my own with yoga. I've been involved with yoga off-and-on for the past 10 years, so I'm getting used to the spine bending in all the wrong ways and realizing that it's normal, for the most part.

That scoliosis childhood event, though, created a life-long distaste in all things spines. I am now ever-so-sensitive about the topic.

Here's why: It is a tremendous part of the human body. It's a part of the central nervous system. It can bend all crazy-like. It's made of different vertebra with squishy material in between called disks that are, like, kind of important, and they are hell if they slip or get out of place.

Don't even get me started on how a spine can break...

Knowing all of the above makes my legs weak.

It's difficult to even type this.

I can watch a horror movie and go to bed a few minutes later with ease. Make me watch a contortionist, and I'll be up for hours. Screaming.
Labels: retro reads