A Fine Use for the Hawaiian Ice Machine

My goal forty minutes ago was to sit down and write about The Girls, but they seem to have other things in mind for me. It seems Nigra, the Sheltie on the right, sees me wearing a chef's hat and an apron with the phrase "Nigra's" on it. At night, she whines at me to do her bidding.

Tonight is no different.

Well, compared to how it was a couple of months ago, it is different. It's different because we've added a Maeve to our Sheltie collection. Nigra must be teaching Maeve my role: daddy manservant.

Since that's the case Maeve has been barking at me all night. I sit down, place my computer on my lap, and to no avail, Maeve or Nigra will come up to me and start whining (Nigra) or barking (Maeve). I get up to get them new water.

I sit down: whine, bark. 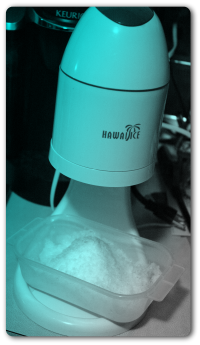 I get up and give them both goodies (or as you might call them in your boring household, treats): whine, bark.

I play with them for a while and then sit back down: whine, bark.

It's relentless. It's unstoppable. Sometimes the only thing to get them to stop is pure exhaustion, and that's not something we keep in jar.

It's the latest demand I did not see coming.

To help cool Nigra off this summer, I started filling little kiddie popsicle molds with water to give her big chunks of ice to lick and chew on. Then, I just started pulling ice cubes out of the freezer and held them for her so she could eat them and munch on them.

It's not that I mind helping her cool off, but there had to be an easier way.

It occurred to me one day that Nigra could be the happiest puppy in the world. You see, she loves the winter because of the snow. With that in mind, I pulled out the snow cone maker (a.k.a the Hawaiian Ice Machine) filled it up with ice, and placed a cup of snow on the floor for Nigra. She licked and chomped her way through the bowl of shaved ice, and asked for more. I threw more cubes into the machine, shaved more ice, and Nigra stuck her nose into the small mound.

Maeve, of course, got her own bowl, too.

Now, during these recent hot nights, Nigra has come to us and whined. We'll ask if she wants a snow cone, and she cocks her head the way she does when she knows the word and that is, in fact, what she wants.

Now, it's time to figure out how else I can use my appliances for my dogs.
Labels: the girls