"Going Clear: Scientology, Hollywood, and the Prison of Belief" by Lawrence Wright

Do you remember the situation in Waco Texas, or the followers of that comet, Haley Bopp?

Yeah. This is a tad bit bigger than that, and perhaps, that's the reason behind my fascination.

How could something created in the 50's by a science-fiction author build so much steam? As far as religions go, Scientology is barely an infant. While reading "Going Clear," it seemed like Ron L. Hubbard, who was behind Scientology, wasn't quite sure what he was creating or working toward. Instead, he was some kind of spider, spinning his web with equal measures creativity and madness. 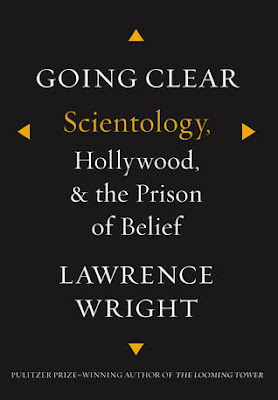 What caught my attention to something so mysterious as Scientology? Earlier this spring, there was a news segment about Scientology one night, using a person that left the church as a major source and how he was constantly followed and harassed. The on-goings of the church were a mystery. If someone had anything negative to say about the Church of Scientology, the church would hit the naysayer with a lawsuit just to shut him up.

But how could there not be any naysayers when the ideas behind the church stem from an intergalactic war that seems to be taking place on TNT's "Falling Skies."

Or, that's how it reads.

As I read, "Going Clear," I couldn't help but think that I needed to pick up more Orson Scott Card novels.

What I didn't want to watch? "Battleship Earth." That movie, starring fellow Scientologist John Travolta, was actually based on a novel written by Hubbard. I didn't realize the connections until "Going Clear."

But watching the news segment captivated me. During the interviews, the church would say one thing, while the people that had left the church (with the guts to speak publically) would say another. It was heresy versus heresy, and no one was going to win, but because former members spoke against the church, you bet your bottom dollar that the Church of Scientology would try to sue them -- and there were plenty of those stories in the book.

What did I learn? If I ever joined Scientology, I best not speak out against the church, otherwise I or a former member would face a heavy consequence. Usually featuring lawyers.

Which almost made the church seem whiny:

"Oh, you said something negative about me. I'm telling!"

I don't see the Catholic Church suing everyone, and people are always mad at it.

When Scientology started hitting the public mainstream was when I caught wind. And I think it was "South Park" that broke wind for me. It was the episode where the kids begged Tom Cruise to come out of the closet (which has it's own inclinations), and there were subtitles throughout the episode as they showcased the alien aspect of the religion telling the viewers that "this is really what Scientologists believe."

Sure the aliens are weird, but I don't think it's the doctrine that really pulled me in.

It was the people.

The creator, Ron L. Hubbard, to be exact, and his fear/hatred of anything dealing with psychology or the study of the mind. He hated it so much, and like a hypocrite, he came up with his own psychological ways of dealing with things. It was a type of counseling called "auditing."

The whole thing sounds exhausting, because it deals with negative events in your life and reliving them, all while holding tin soup cans.

And I am being for-serious, people. Hubbard created a machine to use during the auditing sessions and one of the early prototypes utilized tin cans. It truly is amazing what soup can do.

And as I read this book, I kept thinking to myself, "How on Earth could this be real?"

Which was why I was up until 2 a.m. quite a few nights reading this tome.