We had to PAY Spider-man!

Whether you like campy-crazy or not, a New-York-City-must for a tourist is Times Square. It's a sight that must be seen. It's the overdramatic friend at a party that does everything she can to make sure everyone pays attention to her.

That's exactly what Times Square is. An attention whore.

It's known that people who actually live in NYC won't step foot there, but when a tourist steps foot there, he steps on someone else's foot. And another. And then he bumps a line of shoulders, and he almost runs into someone nose-to-nose. He tries to get out of the way, but he gets in the way of someone else who is also trying to get out of the way.

That's the thing about Times Square: you can't get out of the way. There's only one way; it's everyone's way, and you have no choice but to be in it. 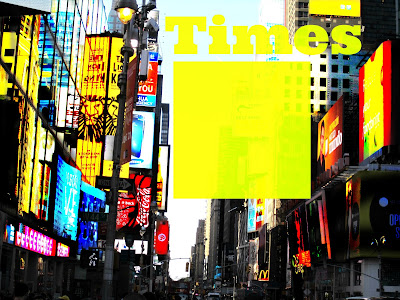 I think it's because everyone is looking up, and over there, and, oh, look, did you see that? What's that billboard say? Kinky Boots? What are kinky boots? Oh! Take my picture with the "Wicked" billboard over my shoulder. Look in there! Press your greasy face up against the glass. Do you see it? It's a ferris wheel inside a building! Gawd, my back hurts. Does your back hurt? I'm going to stop right here and bend over and stretch. Is that a man? Look over there! I think she has an Adam's apple. I'm so hungry. Should we just eat here? I wonder how long the wait for Applebee's is. Wait! Let's get our picture taken with Batman! Wait, no! Let's get our picture taken with Spider-man, instead!

If it hadn't been the end of an already long day of walking, I would've probably enjoyed walking around the infamous tourist trap more. My legs and feet hurt, though, and so did my lower back. At this point, I couldn't tell if the lower back pain was because of standing all day, or if it was because I had to pee so bad it hurt, or if I was starting to get a urinary tract infection.

One of my personal highlights was getting my picture taken with a super hero. Like, I could've posed with a Smurf, but that just didn't feel right. Instead, we gave Mickey Mouse our camera, and he took our photo with Spider-man. Once Mickey gave us back our camera, Spider-man started talking to us, but I wasn't paying attention. I was looking at his fanny pack. I'm assuming it was for his extra webbing?

He did keep saying, "Tip? Tip?" in a muffled accent beneath the mask.

I'm assuming the real Spider-man doesn't ask for tips. And, yes, we paid Spider-man for his time. He probably has Spider-support that he had to pay.
Labels: nyc