After finishing up a silly vampire book, I went up to my bookshelf and pulled out "Tender is the Night" by F. Scott Fitzgerald. Baz Luhrmann's crazy rendition of "The Great Gatsby" is still alive and well in my imagination, and I thought it was due time to expand my experience with Fitzgerald beyond his short stories and the high school novel extraordinaire.

It was a toss-up between "Tender is the Night" and "The Beautiful and the Damned." The book I chose, I'm about to toss out. People on Goodreads were so breathless over "Night" that I decided to roll with it, first. Apparently, my experiment of reading more of the "classics" this year is becoming something akin to a roast, except it's not in good fun.

Here's the thing about books I'm not enjoying. I like to talk about them. Well, talk is too gentle a term. I like to complain about them. For some reason, the worse a book is, the more I can't shut up about it. If the book is brilliant, and I'm in love with everything the author has done: mum's the word. I speak not.

Your book has to suck in order for me to rave about it. 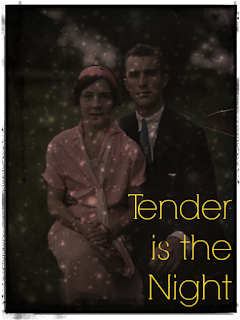 When I read Anita Shreve's "All He Ever Wanted," I couldn't stop raving to my wife about how I hated it. At one point, one of our dogs got out of her cage and ran amok around our living room -- pulling books off of my bookshelf and tearing them up. Needless to say, "All I Ever Wanted" was shredded, and I was OK with that. Into the trash it went. No tear was shed, and that was all I ever wanted.

Now I commence with "Tender is the Night." Here's the thing. I don't hate it. I don't love it. I'm torn.The beginning of the story started off in Cannes, and since I've never been, I imagined people up and down the beach burning their shoulders the color salmon. I mean, back in the 20's did people really protect their skin with sunscreen? All these rich people basked in the sun and in each other's company. They spoke about the next party, drinking something-or-other and wearing clothes people just don't wear today.

And then this killer swims out of the ocean, waving a large knife, threatening a massacre!

Instead, they just talk and act cool, and a young actress named Rosemary gets washed up in their rich-people shenanigans. Based on all they did -- based on how Fitzgerald describes them -- the rich are a bored race. I mean, there was a DUEL, people. Two of the characters got all cocky, drove out to a golf course, and shot at each other based on something said at a party the night before.

And we think soap operas are far-fetched?

At the end of Book 1, a random dead guy shows up on Rosemary's bed in Paris.

We call this "literature." Why aren't soap operas literature? I say we add "The Days of Our Lives" to the Canon.

Meanwhile, this story is actually about a couple -- the Divers. Here we have our two mainest of main characters, Nicole and Dick, and Rosemary (she's all of 18) is in love with both of them. Rosemary hangs around with both of them, drooling after Dick because after two minutes she's in love with him. She also tells Dick point-blank.

But when Dick isn't around, Rosemary goes shopping with Nicole. Rosemary is recently rich, and Nicole, who is old money, shows Rosemary how to spend her cash. Meanwhile, down in the cave that's on the beach, there's a revolution brewing.

Oh, and before I forget to mention it, Rosemary and Dick, during book 1, run around the Paris, sans Nicole. The wife.

Nicole is always just too tired and goes home instead. She's all, "You two go out instead."

And you know what's on Rosemary's mind. I mean, she is an 18-year-old.