It's been awhile since I've been at the end...

I got sucked into some person's link on Facebook the other day. It was posted during a conversation about the movie "World War Z" and how some people took it at face value, an intense zombie film, while others found political undertones in it.

I have yet to see it, but I do know the movie (and book) fits nicely at the end of the world, doesn't it?

The end-times craze has seemed to calm down a bit, at least in major Twitter feeds, especially now that the Mayan calendar debacle has come and gone. I mean, I'm sure more self-made prophets will continue to manifest and lay claim to a specific end date, but all has been quiet on the end-times front. For me, especially.

That is, until now. 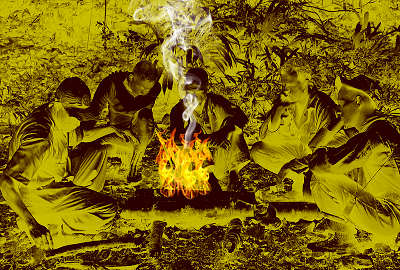 After reading the conversation about the movie and all it's fast-paced scariness and political undertone-ness, someone posted a link. You know how links are. They beckon. So, I clicked on the posted link, and I got sucked into an entirely different subculture dealing with the end of the world -- not just exciting dystopian novels ala "Divergent" and "The Hunger Games" or "The Road" -- but a serious subculture: preppers.

You may watch the show "Doomsday Preppers" on TV. I have only heard about it because I enjoy my end of the world drama scripted, thank you.

Because of that article, and the comments under it, I started to freak out a little bit. I mean, yes, the weather and climate is all a bit freaky lately, and maybe I wouldn't mind less emissions from coal and gas and such, but then, someone goes and mentions that solar flares are coming. Solar flares that have the power to knock down entire power grids, disrupting cell towers and microwaves, which will make us lose communication (and food warming abilities), and we won't have the technology to warn the masses about the next asteroid hurtling toward earth to make an impact...

Good Lord, where are my Tums?

After reading the article about preppers, I realized that I don't have any ammunition, and I have yet to stock the fridge out in the garage with gallons of water. I just threw away a ton of stale caramel popcorn, and although the milk's "good" date was two days ago, and it still tastes fine, how long will it really last?

I mean, it doesn't matter, does it? Our cereal boxes are practically empty, so it can't be used there. I should probably stop eating food that isn't organic, while I'm at it. I mean, I hear it's mutating us. I do feel funny.

Did you hear that? Is someone at the door? They can have our TV; it's not going to work when the solar flares come and the asteroid pops our atmosphere like a water balloon or whatever, but they can't have our salt. It's only that small canister with the chintzy spout, but it will cure all the meat we've got right now, which isn't any, so what do we do now that we have no livestock?

This is why I stay away from end times anything. My thoughts take over. In truth, I don't really know what to make of any of it -- so I will do what I do best -- make light.

What are some things we need at the end of the world? Well, it seems that we need some nonfiction books and good storytellers. I'm sure rifles will be needed, or maybe a good slingshot (I choose slingshot), but I'll be focusing my next couple of installments on some important books and the importance of storytelling.

*The photo in this post is from NASA, and they said that they wanted to be acknowledged when using the photo. So, this is me doing that. I thank them for their cool photos made available on Flickr. Although, I altered it. It was originally black and white.
Labels: notes at the end of the world