I "friended" Christopher Pike on Facebook the other day. This was an important move for myself because we're like best friends now and he's going to get my own books published through Simon and Schuster.

But I did like his fan page because as I started reading "Thirst No. 5: The Sacred Veil," I thought, perhaps, just maybe, Pike had a ghost writer. You know, like V.C. Andrews did...after she died.

I felt bad for thinking this, but the book felt a little different compared to the others -- actually, the last three (the newest ones, which started up again after 16 years) felt that way to me.

You have to understand, I started reading this series when I was 13. At that point, I didn't care about classic literature. I just liked a good, spooky book. And I was obsessed with Christopher Pike as a storyteller. Is he an amazing writer? No. Does he spin a good yarn? The yarniest. Between R.L.Stine's "Fear Street" novels that I read as a kid and Pike's, I kept all of Pike's and sold all of Stine's. That's how yarny they are.

But, I guess, after leaving a story lie for 16 years and then picking it back up, the voice may come back just a TAD bit different. Maybe? I don't know. Please don't tell Mr. Pike I said that. 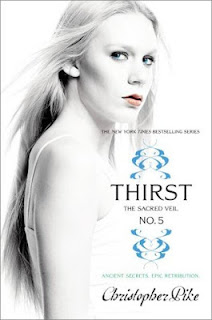 Recently, while perusing Pike's Facebook page, I scrolled down and saw he logs in from time-to-time and posts LONG passages. Ramblings. Answers to questions we might've had at the back of our minds. And some of those ramblings included where he comes from--spiritually. After reading all of those rambles, I'm guessing there is no ghost writer.

Pike does something interesting with a lot of his fiction -- he weaves in spiritual aspects that borrows heavily from Hinduism, with splashes of Christianity.

In this latest novel, Pike referred back to his past stories, especially the sixth book when time-travel was actually a major plot point -- which was nice -- and also explains an important battle that is in Hindu scripture, with a science fiction twist, which was fascinating.

One thing that was at fault with this book was the "bad guy." I need a good bad guy (I offer you this oxy moron), and I need that bad guy defeated -- but I feel like this current Big Bad was merely mentioned/introduced because Pike's got more books up his sleeve. Like, let's mention this bad guy, but save him/it for later. He has mentioned that he's got another trilogy in his head with Sita (can you call it a trilogy when there's been 9 books already?)

I guess you could say that the Big Bad in this book is actually Sita's memory and how the holes hurt her from helping those around her.

Regardless, Pike is gutsy with his mixture of spirituality from Christianity and Hinduism, which makes for interesting reading. This is probably the most fascinating part. Mixed with action, and Sita's fearlessness, as well as humility, I can't help but love her as an action hero.

For the ninth book in this series, Pike is smart. It takes some finesse to braid together fiction, history and religion. I don't know if I could do it as a writer, but I always love when writer's out there do it for me.