Out there, I have joined the legions

I never really wanted an iPad. I know they're curing cancer and helping children become more dependent on technology, but after playing with my friends' and my brother's, I decided that I didn't have the platform for a tablet in my life. Except, maybe to serve drinks on.

It was like the Nintendo Wii. It's fun to play on, but I don't need one in my house. It doesn't have a keyboard, and people, this boy needs a keyboard. My typing is all-kinds of lickety-split. Thumbing on an over-sized phone? I'm as slow as your grandma.

Plus, the fear of coming down with a thumb-typing related strain that will affected me when I'm older terrifies me. With the keyboard, the thumbs just hangout at the space bar. 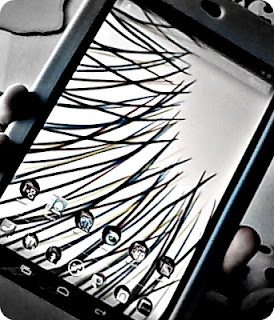 It doesn't help that my attitude toward Apple (actually the people that own Apple products) has soured. The minute someone gets an Apple product in their hands, they become a different person. They start to look down at everyone who doesn't use Apple products, even though they don't know how to use their own. I'm afraid if I own any more "i" products, it'll affect how I treat people. (My two iPods have been grandfathered in to my distaste, and therefore don't count.)

"But, they don't get viruses," they tell me.

"They're so intuitive. It knows what I'm going to do next, even before I do," I'm told.

"Your silly Android phone is going to get bird flu," and they push me into the corner as they swipe their thumb across their iPhone 5's with shattered, spiderweb screens.

And I digress, as per usual...

Last summer, I cyber-stalked Google's I/O conference. I think Google is the bee's knees, but I'll never get to go. It's too far away, and too expensive. You can tell me the government owns Google all you want, and that they're watching me as I type this (in Google Drive, to post on my Blogger account, which is also Google, nonetheless), but they've treated me just fine, thank you. No black SUV's or anything.


I also like reading about where technology is going, so I logged on during the few days of the conference to read about all the different products that will come out, and web apps that were being introduced, and even products we'll not see in our hands for the next 10-years -- I'm talking to you Google Glass. I attended the conference virtually, and I went in my recliner.

One of the big reveals was their own 7" tablet. Another one? I'm sure critics proclaimed. There's the Nook! There's the Kindle! We don't need another one!

You know what's coming, don't you?

I started to want one. Even though I needed a tablet as much as society needed new episodes of Snooki and Jwoww, the want didn't go away.

Instead of purchasing it, though, I used my birthday money on a trip to St. Louis. I told myself that my phone (which ran the same operating system as the Nexus 7) and my new laptop were enough. But the idea of it continued to become more and more desirable.

Then, Wired magazine gave it a 9 out of 10 -- which is basically a perfect score on Wired's scale, and even my tech-savvy brother talked it up.

So, when I sat on Santa's lap this past Christmas, I asked for it.

I have now joined the legions of people out there with tablets.

Do I need it? Hardly.

Is it super-fun? The funnest.

After about four months with it, I'm still trying to figure out how it fits in my life. I use it daily, and it's great to read on -- especially all the random RSS feeds I subscribe to. It's also been a handy cook book for the recipes we've pinned from PInterest.

It's a wonder to social media on it, too (I'm using social media as a verb right there, did you see that?), not only is it an eReader, but it's every eReader. Right now it moonlights as both a Kindle and a Nook. I can shop and compare prices at both Amazon and Barnes and Noble, as well as Google Play's book store.

It's a little multimedia kiosk that fits right in my hands (with a cool turquoise blue cover to protect it's outer shell).

I even have a keyboard for it. It's really small and only munchkins can use it, but yeah, I drank the Kool-Aid.

I have joined the legions.