What hasn't been said about this book? I am so used to modern horror novels, that I wasn't mentally prepared for "Dracula." I forget that the book was published toward the end of the 19th Century -- a time period I haven't really lived in before, and although a different frame of mind could frame my liking of the book, I'll decide to let it not be my favorite. Here's why:

There was so much of it. And this comes from someone who loves dialogue. I eat it up like you eat spaghetti and meatballs. There can't be enough. I love to write it, and I love to read it. It makes me flip the pages of a book faster. 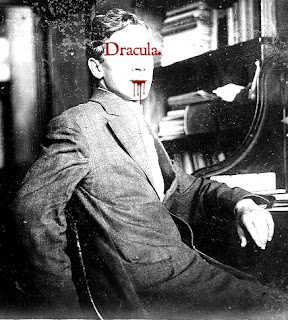 OK, I'm letting the middle-to-end of the book tarnish my thoughts on the entire book.

The first parts were decent enough. Jonathan Harker is actually staying with Count Dracula, so there is a lot of interaction with him. He's all old and ugly, with long finger nails. He doesn't eat. He climbs down the side of his castle in a grotesque and disturbing manner.

You now, the usual host-like behavior in Transylvania.

Had I not had a narrator reading it to me, I think my opinion would be different, but instead, the narrator made Count Dracula sound like Gru, the super villain father from "Despicable Me."

It's difficult to take that voice seriously when you're picturing his adoptive daughter shaking a stuffed horse at him, yelling, "It's so fluffy!"

I will give Stoker the benefit that if read it in a time when books like this didn't exist -- like the year it came out -- that first part of the novel would've been terrifying.

Instead, it was just slightly creepy. It would've been better if Dracula ran his yucky hand through Jonathan's hair at some point, or lightly touched his neck with his yellowed fingernail. Maybe even winked at him.

Then, we get introduced to Mina Harker, Jonathan's fiance and then wife, and the infamous Van Helsing. And the book goes downhill. The narrative yawns before us as we are inundated with nothing but their ruminating.

All they do is talk. Blah, blah, blah, blah, blah. I think this is where the epistolary novel runs into trouble. All the major action has already happened, they're just keeping their little journals up-to-date. You're not experiencing it with the characters, you're being told later.

So, there's that. And then, when they do come in contact with Dracula, he's a talker, too -- it's like those moments in movies when the bad guy just blathers on about world domination, and the good guys get bored with it all.

By the time we get to the end of the book, Dracula has gotten away and the characters are on their way to track him down. We all know that Dracula meets his inevitable end, but I didn't know how that end was met...and sadly it was a bit of a let down. I won't ruin it for you -- if you want to read it, I'll let you ruin it for yourself.

For what it was, when it was written, it's an important book -- I understand this. Without it, lore and horror may not be where they are today. I can appreciate that.