Back in September, after going back and forth between two different mechanics, it was decided that it was time to give up my beloved Gatsby. My 2005 Volkwagen Convertable New Beetle was probably one of the worst financial decisions I've ever made. It was a massive car payment, something Steph and I could've done without our first five years of marriage, while also dealing with a mortgage.

But, it was my dream car. I went over to Tom Wood Volkwagen, a place I never want to deal with again, and put in my order for one the color of Harvest Moon, with a tan top.

The car was reliable, until we hit a truck tire in the middle of 465. We had no choice but to go over it -- and because of that, I believe the car was never the same. It had been traumatized. Instead of it being considered "totaled," we payed the deductible and it was fixed. I didn't have it for a month while it was being fixed. And it wasn't completely fixed until later that year after dealing with many headaches.

We took it everywhere. I drove it 50 miles a day to and from work, and then we also put an enormous amount of miles on it in just 7 years. It currently has 120,000 miles on it.

I didn't put the top down nearly enough. That's the one thing I wish I would've done with it more, but when you live in Indiana, there really aren't many opportunities to put the top down without either freezing or sweating from point A to B.

I'm currently driving my grandfather's station wagon. I've definitely had to get used to it. I miss my little car that could fit into any parking spot, but I am happy to at least have a car. It's nice to not have a surprise car payment. 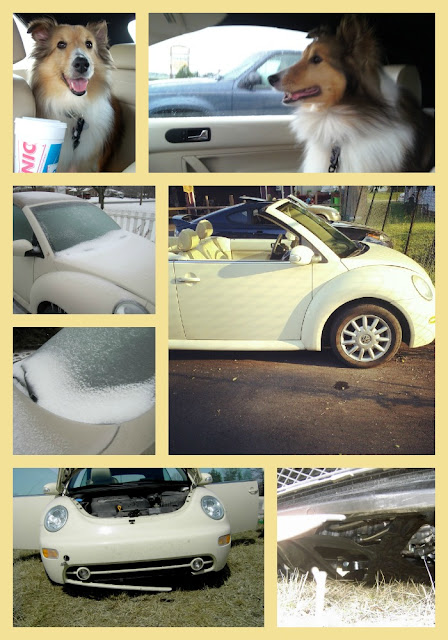