First there was a robbery, gunshots, SWAT, and a blocked neighborhood. Then, the power went out in (what appeared to be) half our city -- while we were grocery shopping. If the day wasn't already bizarre enough, what else could possibly happen?

I didn't use hyperbole in Part One because there was no need. The story was just too ridiculous on its own for me to add anything to it. Part Two wasn't so fabulous. Hyperbole was definitely inserted (you're welcome), but Act III will be without any over-dramatic verbal flair once more. Again, the adjective ridiculous sat on our faces.

The day was nuts, but the weather was nice -- this took place during that nice cool spell right after the Earth decided it was a microwave for the summer. The windows were open. The front screen door was open (after the robber was arrested) and so we decided to partake in some yard work. Let's get some of those crazy weeds pulled, shall we?

Steph and I worked our separate ways -- I think I was mowing the lawn, and she was in the back 40 pulling weeds. She worked on a small patch, filling it in with some new mulch, tearing away the weeds. She moved on to the vegetable garden, yanking out the tall grasses. At this point, I, too, was pulling up unwanted grasses that had sprouted where a pond once was. 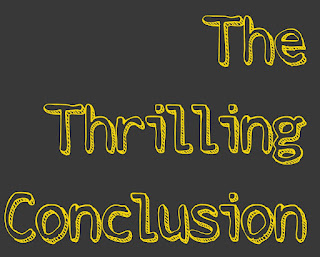 But mowing the lawn made me thirsty, and so I went in to get a drink. As I walked out onto the porch, I saw Steph jumping around screaming. She was swatting at something and then I saw a giant bug dive-bomb and attack her. She jumped out of the garden and came running in doors.

Outside, protecting the sweet pea and the weeds, was a giant bumblebee. That's what I saw hitting Steph in the shoulder. She had been stung about four times. We were bewildered. Didn't bees lose their stinger? Not bumblebees. They can sting and re-sting. Apparently, Steph had gotten close to something and Mr. Bee went into protective mode.

Steph had to ice her stings, which turned an hot, bright red, and after a while, decided to go back out and continue pulling weeds.

It's like that scene in a horror movie. The audience is screaming at her, "No! Don't return to the garden! It's still out there!"

Boy, do I wish we heard the audience scream.

I had gone back inside, and when I returned once more to the porch, Steph was swatting at her head screaming.

I ran outside, and as she flicked at her hair, the giant bee flew out and buzzed at me. Steph ran inside to the porch, and I tried to smack the bee with my work gloves. Flailing around, swinging them in every direction, I felt the bee dive-bomb on my head. I ducked. I yelled. I swung hard, but missed the bee, and instead, hit my glasses clean off my face. They bounced onto the patio and I rushed to grab them and joined Steph inside the screened-in porch.

We were in shock. And to our horror, the bumblebee, which had to be the size of a thumb, buzzed up to the screen and crawled around it. It flew around the porch and landed back on the screen. We couldn't go back outside because the bee was trapping us in!

"OK, we are done. We are not doing anymore yard work tonight," I said.

At this point, what was happening? This Saturday had turned on its head and was now attacking us. First gun shots, then no power, and now what? A bee? One little bee was keeping us prisoner in our porch.

I went to the garage and got the wasp spray. It was all we had, and as the bee continued to climb around the screen, I shot at it with the spray. It flew away.

I couldn't tell. It's little yellow and black body was gone.

We had just purchased solar lights at Target (remember, some of them were glowing while the power was out) and they were still outside. We needed to get them. Instead of going out the door where the crazy bee could still be, we stepped out the window on the other side of the porch. Steph went first and dashed to get the lights. I walked behind her and held the wasp spray like it was a gun. I looked around, left and right, to make sure the bumblebee wasn't waiting for us. Steph grabbed the lights, the bee didn't attack again, and we were safe.

We stayed inside the rest of the day, hoping that was the last of the crazy that had hailed down on us that fine Saturday.