Did you think I forgot this Saturday even happened? Well, I actually did. I have become a terrible website updater. It's become that thing I really needed to have when it first came out but got bored with. It's been shoved in some corner so it becomes a filthy, grime-covered menace to society.

I've been writing in this little piece of cyber space for six and a half years, so it's not that it's shininess has gotten dull. My drive to fill this site with drivel ebbs and flows.

But enough of my excuses. It's time to continue on with (loud booming God-like voice) THE WEIRDEST SATURDAY EVER!

We last left our hero dizzy with glee and horror when he found out that a bank robber had shot a police K-9 a block away from his house (in a church yard)! He was stuck inside his house, heard another gunshot, and had a chimney sweeper come to his house. All that was missing was a woman with an umbrella lilting down from the sky.

We thought that was it. We thought that nothing more bizarre could happen. He and his wife got into the Beetle to go grocery shopping, and as they drove, they realized that more than one set of stop lights had stopped working and crazy Andersonites weren't abiding by the four-way rule very well.

We looked around to see if a tanker had exploded, to see if the Terminator, with the raw, gouged-out face of Arnold Schwarzenegger, stood by the side of the road directing traffic.

But, no. Only the traffic lights were out. Or so we thought.

As we continued to travel down the street, it became apparent that it was more than just a couple of lights. It was blocks. People stood outside of their businesses with their phones trying to figure out what the heck was going on.

We needed to go to Target and Meijer, but when realized the power outage was so big, we weren't sure if those shopping trips would happen. We drove by Target like creepers, trying to get a good look inside, and we saw darkness. Without the power, people were walking around the store like zombies and malfunctioning robots.

Even though the power was out, we had traveled too far to turn back. We went forth to the Meijer. And walked into darkness. 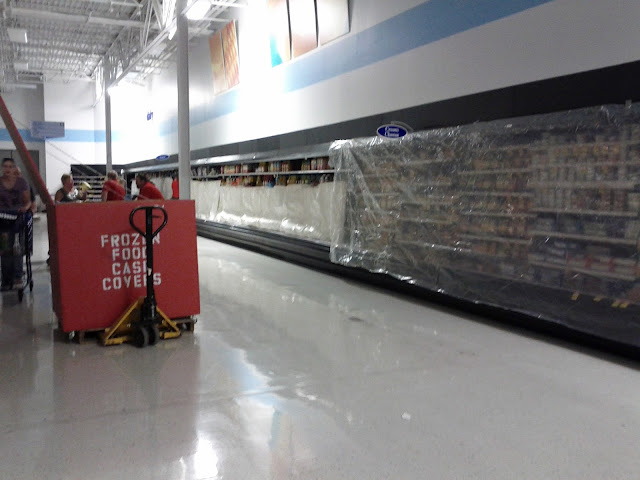 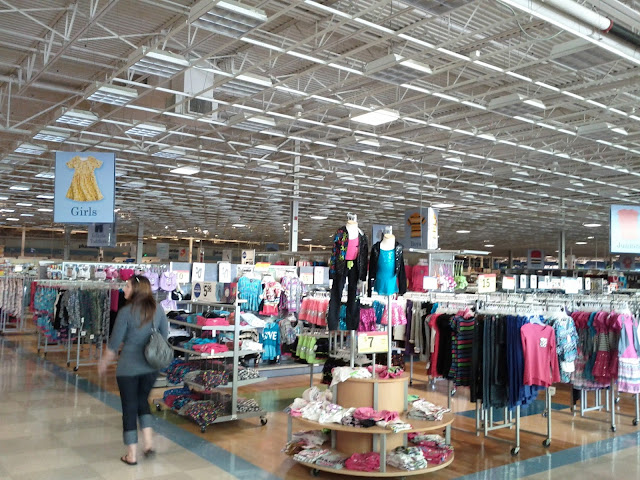 But, alas! The store was still open for business.

The cold cases were covered in plastic, and people were still milling around shopping. So, we joined the fun. But not too much fun, mind you. The one thing I learned when people shop in the dark: they move slower. We were in danger of getting caught up in that. We were practically speed-walking down the isles, grabbing what we needed so not to be tempted to meander.

I was tempted to meander, but Steph pulled me forward.

"Not now! We've got to move!" She yelled, pulling me along. Or something like that.

During a normal shopping trip, we check ourselves out. We bring our own bags. We can usually get a cart-full of groceries into about 4 big, sturdy bags. Sadly, the only open lanes were those manned with people.

The checkout process took a bit longer, but once we were through the line we decided we would venture over to Target to get the lights we wanted. They, too, were still open. 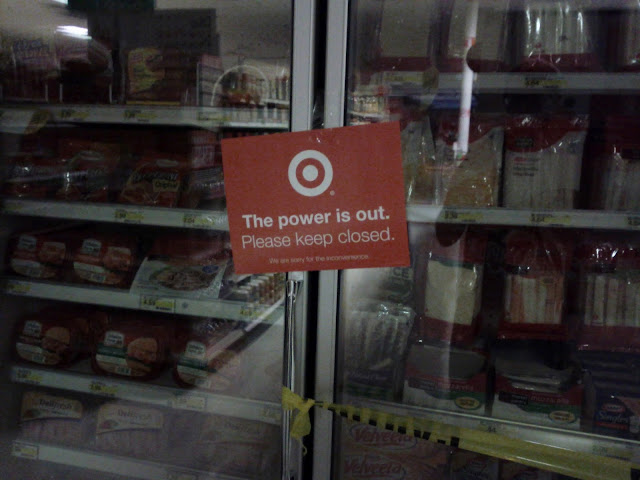 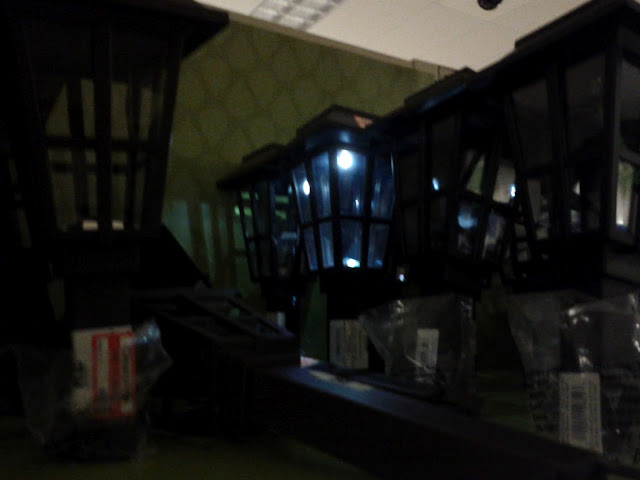 Even one of the solar lights was working in the dark. They lead the way out and we went home. Too bad the crazy day wasn't finished with us yet.