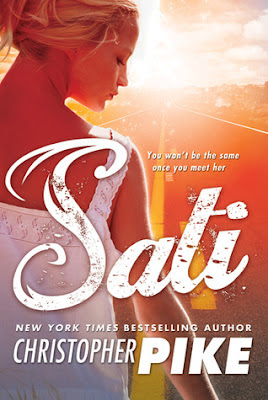 I've been reading Christopher Pike for 20 years now. We're old friends, he and I. This book was originally published in the 80's when AIDS really started showing its ugly face. I'm sure, back then, this book pushed some boundaries. Rereading it now, where cancer and global warming has out-scared the public, it's a modern parable. Oddly, this recent publication of it has discussion material in the back. Are people teaching this book in high school?


I would've never thought one of my favorite authors would be taught in school.

Christopher Pike is great at weaving stories. It's not the language that gets you but the plot. Throughout his career he has dabbled in new age philosophies, and he tends to lean toward Eastern religious beliefs, namely Hinduism. This time, in "Sati" he plays around with the second-coming of God -- Sati is also a name from Hinuduism.This is not Christian fiction, however, nor does it slam any religious point of view.

Our main character, Michael, who is a truck driver, is on the road in the desert and picks up a young blonde on the side of the road. He says he's going to L.A. and she says that's where she'll go, too. At one point, we also discover that she is calling herself God. This mysterious woman tells Michael that she will be staying with him. Michael lives in an apartment complex, and some of his neighbors are also his friends. They all become equally mystified by Sati, as well as skeptical.

She begins to host random meetings, first in Michael's apartment, and later in a few different areas around L.A. She, first, has her groupies sit in silence -- this alone helps many people. Then, she talks or answers questions. A lot of her answers kind of go in circles, but people feel at peace when they are with her. Later in the book, she even visits with religious leaders who have come to see her. She also bakes amazing cookies. These cookies, we find out, are key later on in the book.

Without giving too much away, it's an interesting book that looks at why people believe and the subject of blind faith.
Labels: book review